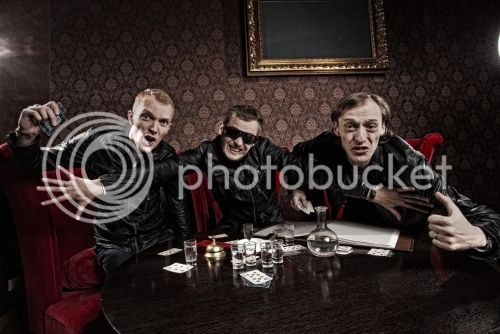 The rain started to come down a bit harder, it seemed, when I went to light my cigarette.  Swanky Tunes had just finished their set at Ocean Club in Quincy, MA and the two Russian mates in attendance from the trio fought their way through a crowd of adoring fans to grab a much needed seat, breath, and drink.  I introduced myself to Stas from Swanky Tunes, a tall man with a contagious smile and barely enough of an accent to tell he’s from Russia. “Can I get you a drink?” he says.  “With all the talking we’re doing, we’ll need it!”

What we originally had set up as a ten minute interview turned into what was more like old friends catching up.  Stas is a conversationalist, that is he could turn an introvert into Oprah, it’s very easy to spend time with the man. He let me know early on (and called my bluff when I forgot) that after years in the industry and life experience, he cannot judge things anymore.

“I can’t say this song sucks or this dj sucks since he only plays hits like some blogs and reporters say. Sometimes you just need to give things a chance.”

What was it that brought you to EDM?

“We first heard (EDM) music when we were thirteen.” He says. “It wasn’t called EDM back then, but when we heard it, it was almost like a switch went off. We didn’t like rock music, we didn’t like pop music, this was different.  We didn’t go out and start djing until maybe 2005,2006ish.  When we started in 1998 we would listen to our idols of the time and pick apart their songs. How did they do what they did? And we would try to create something like that.”

So you strictly produced for the first almost 8 years of your career before stepping behind the decks? That’s a lot of original music!

“Well, in the beginning we all played instruments.  We had a boombox set up for the beats and we would play around the boombox.  Playing with a band you can’t make the crowd follow you.  With (electronic music) you can manipulate the crowd with your energy, with the songs you play.  You can make them follow you.”

We stepped outside for a cigarette and the rain hadn’t seemed to stop in the slightest.

“This place is crazy.” Stas said staring out into the ocean.

He took a long drag of his camel, and grinned at me.

“The last 4 days of shows have been wild but to end here is amazing.  I’ve never played in the rain before. Normally you’ll be under a tent and nothing hits you, but here the equipment was getting wet, I’m soaked. It’s wild.”

So what’s next? What’re you personally looking forward to?

“We’re spending a lot of time in Los Angeles now working on some new tunes.  You’ll be hearing from us soon.”

And like that with a wink he was gone.