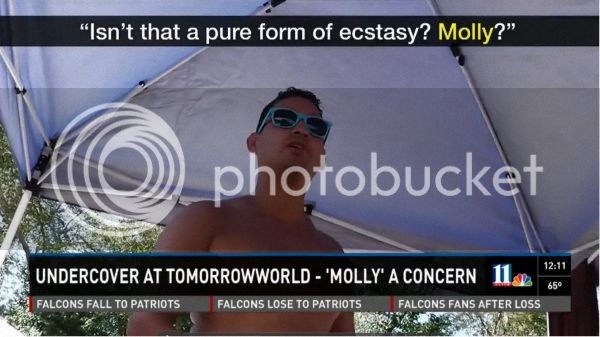 Over the weekend, 11Alive News, a local news channel in Atlanta, sent two journalists to TomorrowWorld. Attempting to ride the recent media frenzy over drug use at EDM festivals, the two reporters “went to the event, bought two tickets, and took a small camera along. They captured activity right out in the open”.  Basically, the two “investigative” journalists walked around and interviewed people about their experiences with Molly. On its face, this is a fairly routine attempt by a local news station to cash in on a hot topic in media. However, the approach is incredibly distasteful and presented in a way that one would expect people twice the age of the dance music demographic to present such material in. While attempting to get a better idea of what goes on at a music festival is surely seen as a good source of news amongst the baby boomer generation, what is really to be gained from such a shallow exposition? The frame of reference of this piece is more or less that the only point of a festival is to do drugs. No mention is made of the eight stages featuring some of the biggest acts in all of music, or the fact that TomorrowWorld will go down as one of the safest festivals in 2013 in terms of arrests and hospitalizations. The piece paints a picture of a collection of adolescents taking illegal drugs in a field somewhere in Georgia. Period.

“Do you find that it’s easy to get at a place like here?”, Shawn Hoder questioned one of the attendees. “Uh, very easy to get at a place like this. People walking around like hey I got Molly, I got Molly,” the attendee replied. Because the words of one individual in the middle of a music festival is gospel. While we understand the need for investigative journalism in our society (especially in the U.S at this moment), this was one of the more poorly executed attempts at a coherent investigation. Check it out for yourself: