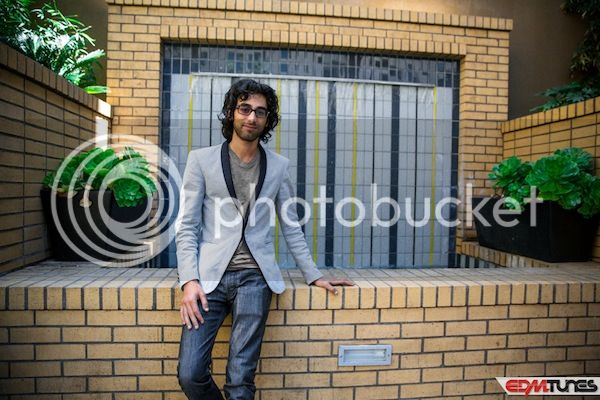 In anticipation of their new single that was just recently released (see below), EDMTunes had the great honor of sitting down with Klaypex to dissect their brains and learn more about their humbling rise to fame. Johnny Atar and Mark Mark Emmanuel (who unfortunately couldn’t make it) had more than a couple of interesting tales to tell when we met up with them at their LA studio. The boys have come a VERY long way from their home-country of Israel to Toronto, where they first met at an after-school program. What started off as two friends with a set of shared interests quickly transpired into a worldwide phenomenon that is Klaypex today. Originally labeled as ‘dubstep’ artists, the boys have since taken a few steps beyond their norms and added a whole new style and genre to their expanding arsenal. Peep our interview with Johnny below and see who Klaypex just added to their team. Don’t forget to DOWNLOAD their latest release today!

I read that you and Mark first met at an after-school program in Canada, explain how that came along.

My life’s a little more complicated that Mark’s becauese my mom worked for the ministry of foreign affairs in Israel, which is a government job where once you rank up, they’d eventually send you out to other embassies and diplomats in other countries. So thats why I was originally born in New York, because it was during one of my mom’s earlier missions. I went through living in Miami, Jordan, New York, and finally Toronto when i was about 15-16. Mark moved to Toronto as well when he was 15-16; I was there as a diplomat while he was there as an immigrant. So at this afterschool program, we both had difficulties making friends because of our mentality and culture was extremely different from everybody else who was around us.

The fact that both of us were from Israel originally made everything different psychologically, we had the whole mandatory drafting for the army as an adolescent so we were really hostile about everything; which caused the both of us to become very subdued into our nerd ‘clique’. Speaking of nerdiness, we’d build computers and such as a hobby. Just to put into perspective how nerdy i was, I had already built my first website by the time i was 13. And by the time i was 14, I was already hosting servers with the spare computer I had. Essentially that’s how we met, we were very likeminded people and had a set of shared interests.

Why did you Klaypex choose to bring their talents LA?

EDM is a business of it’s own entity; and Los Angeles is at the heart of it all. It’s also the heart of many other creative hubs.I feel that we’re creative people as well, so this is the most ideal place to reside in since we’re surrounded by likeminded people to inspire likeminded products.

I know you guys originally started off as producing rock music in 2008, but since then have gradually evolved your elements into EDM. What sparked this transition?

It’s pretty interesting how we transitioned about it, actually. When we started off as a ‘rock band’, there was another friend of mine who was a drummer. During which, Mark was my best friend who would just chill with us while me and this drummer were jamming out. I played the guitar and the friend would do the drums, all while Mark would lounge around simply cause he was my friend and he wanted to hang out. Gradually over time I thought it sucked for him to always have to just stand there and watch us jam. So one day I went up to him and asked, ‘dude, what’s your favorite part of a song?’ ‘I like bass,’ he responded. So i thought to myself, ‘okay well lets go get a shitty bass and a really shitty amp’. So we got a combo for about $120 and Mark picked it up really quickly; he would be able to read tabs and play a pretty difficult track such as Red Hot Chili Peppers. Soon enough we started jamming out on a regular basis. After a while, our drummer friend lost interest in the band since he was busy with his own things on the side, so it was just two, bass and guitar and ever since then we’ve been the dynamic duo.

As dubstep artists, do you guys see the inner rockstar as an influential factor in how you guys produce music now?

Definitely! We’ve been through a lot of genres in between as well. For me, personally after I left Toronto in 2010 before Klaypex was formed or anything like that, I didn’t know what i was going to do with my life. So I took a year off to just learn how to produce better. I dug my hands into a bunch of different genres from R&B to hip-hop to even industrial music; I tried everything because I knew that I love music, not just any specific genres. I thought to myself that if i was able to, at the very least, do well at each genre, then I could master my productions. So that’s what I did that year. During that same year, Mark went to an independent music production program at a college in Toronto, which he says didn’t teach him anything *chuckles*.

Explain your plan of attack, or marketing scheme I might say, to generating the high volume of views on your YouTube videos. I’m sure many other artists are wondering how you guys are able to have so much traffic.

It’s pretty straight forward to us actually. Everybody seems to always start locally and try to grow and become this global sensation. This is a mindset that sticks for some odd reason even in the age of the internet, which was very odd to us. It seems obvious that we didn’t want to start locally, instead of having to work from the bottom up, we wanted to start at the top (globally). We said to ourselves, ‘screw the shows, if we attack the internet and they don’t like us, how could these local shows get us anywhere?’ We tried our luck online and we nailed all of our social medias, which was our first priority: presentation, branding, a cool name, and making sure there wasn’t any other ‘Klaypex’ floating around.

We definitely had our heads in the marketing business. We also realized that we needed people to start listening to our music, so how do we do that? We tried to promote our music through websites like Reddit and talk to videographers about using our music for their videos. Ultimately, that led to us working with Mike Divas, who hooked us up with the guys who made Dubstep Gunz, which sort of opened up the doors for us and has since generated over 14 million views online.

We knew that it was going to be something special and huge, but did not anticipate for it to be anywhere nearly that big. We thought the best case scenario would be a million, we discussed numbers a lot to be perfectly honest with you.

You said you wanted to produce music for others one day, maybe even produce a movie soundtrack. Who’s one artist that you would like to collaborate with and to produce for?

Without a doubt, Katy Perry. Her productions are out of this world, not to mention her voice. Same with Rihanna as well.

With your guys’ already established fanbase and recognition in the EDM community, why do you guys shy away from touring?

There’s this guy named Travis that we recently met and we decided that he was the third piece that could fit into our project. So he’s going to be the one doing the live shows moving forward, essentially. We haven’t done live shows for a couple of reasons, the main one being that we’re pretty stable. We don’t like the whole lifestyle behind it.

With the single set to be released in October and an album early next year, tell  me about the 12 track album that we should be expecting soon.

It’s very very versatile, there’s a lot of different sounds on it. Some that is very reminiscent of our old stuff, maybe a little bit more matured and evolved. Some of it is more progressive house and trancey, some of it is borderline pop; so it’s extremely versatile. In general, I think that the sound quality and production level is improved drastically. We will also be doing a remix package with a couple of bigger named artists that is set to be released in late october as well.