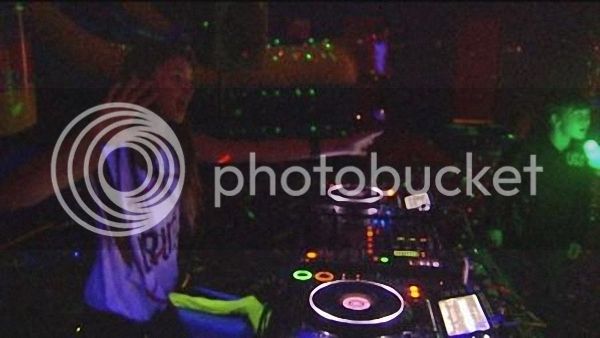 Yeah, you read the title correctly. As if any of us needed any more evidence that electronic music is spreading at an exponential rate, we have our next wave of evolution: a nightclub for 9-15 year-olds. But wait, it doesn’t stop there. The idea was launched and executed by 13 year-old DJ Elle Morgan, aka Ellisa Freeman of Houston, Texas. Already possessing a legit amount of credibility in the Texas scene, her Facebook fanpage is also populated by pics of her with the likes of Steve Aoki, Angger Dimas, Borgore and more.  Her brainchild? “I only play for 21 and up…I thought [the under aged ‘club’] would give my younger fans a chance to see me,” according to the source story from ABC Local.

The result: Elle’s House, which is held in a section of an indoor kid’s party venue in Woodland, Texas called Pump It Up (ironically, enough.) You may be wondering, what kind of parental response this is getting? Well, resounding approval after initial qualms seems to be the consensus from the original post. “I wasn’t sure at first either…[but] now that I’ve been here, I know that I will definitely bring my kids back here,” Candace Boswell said of letting her 9 year-old daughter attend. Another parent, Katie Guthrie, mused that “I think it’s safer…than hanging out at somebody’s house. I don’t know if there are parents there or not; at least here I know it’s supervised, and there are police officers outside.” Parents must check their child in and out and list emergency contact information. Event staff are decked out in neon garb for easy spotting by and rave-tired children.

And what is inside? Pizza, soda, candy, games, glow sticks and a dancefloor (without alcohol, duh), with a couple rules. No bad language, no kissing…and no twerking. “Anything that wouldn’t fly at my house is not going to fly here…[but] it’s been really clean [so far]. Only PG” DJ Elle said. A nice acclimation for the ravers of tomorrow, DJ Elle eventually hopes to open her own club…and one must admit, this is a pretty impressive start.