Crying kids and “buckets of vomit” are not what you would usually associate with an EDM show, especially a Hardwell one. Unfortunately, the three went hand in hand on Thursday night in Belfast, the capital of Northern Ireland. The “I Am Hardwell” tour is making its European stops and the Odyssey Arena was set to go off without a hitch. But, according to BBC News, more than 100 young people were treated by paramedics for the effects of alcohol and, in some cases drugs.

It’s easy to associate accidental deaths at concerts with drugs, but alcohol, which is readily available and legal, can cause problems too. BBC News reports that, “police will also investigate claims that many underage teenagers were able to buy alcohol as well as being allowed in while clearly drunk. Ten thousand tickets were sold for the event, and police said about 300 young people were refused entry to the venue because they were either underage or intoxicated.” It’s one thing to pregame before a show, but this is just ridiculous. Over 105 attendees, including teenagers, sought medical attention inside and outside of the show. 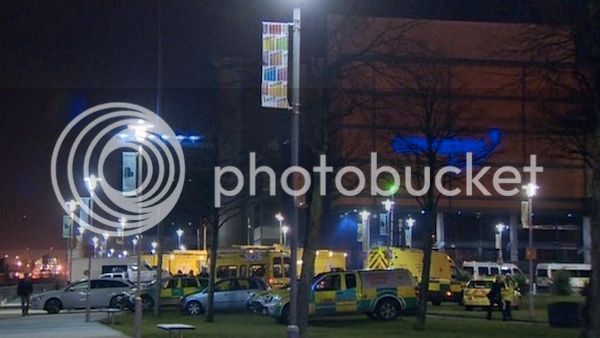 Seventeen people ended up in the hospital and three have been discharged, according to BBC News.

Charity worker Joe Hyland, who runs the SOS Bus NI voluntary service, said: “I was dealing with kids with buckets of vomit and they were crying – it was a mess.” Also noted, “five ambulances were called to the scene and the Northern Ireland Ambulance Service (NIAS) declared the scene outside the concert as a “major incident,” according to BBC News. “They said this was due to the number of resources they had to deploy in order to treat the patients.”

As if that wasn’t enough, there were reports and videos of fights breaking out inside the venue as well. Parents eagerly awaited outside The Odyssey for the concert to end.

This wasn’t the end though. The next leg of the tour was going to be in Edinburgh, the capital of Scotland, but after these insane bouts of underage carelessness, that show has been canceled.

Edinburgh, so gutted tomorrow is canceled. I was really looking forward to it. It’s out of my hands, we’ll announce a make up date asap!

Again, according to BBC News, an I Am Hardwell promoter, Colours, said:

“We regret to inform you that after a lengthy meeting with the City Chambers in Edinburgh, licensing board and Police Scotland this afternoon, a decision has been made to withdraw the licence for the I Am Hardwell event tomorrow night at The Royal Highland Centre, Ingliston, Edinburgh. This means that unfortunately the event will not go ahead. Due to the situation in Belfast on Thursday 6 February, it was decided that the event in Edinburgh should not go ahead due to safety concerns. We will give more details next week regarding either a rescheduled show or the refund procedure. We thank you for your understanding at this time.”

These events mirror the tragedies that struck Electric Zoo this past year. You can recall, the third day of the weekend-long event was canceled due to two deaths that were linked to drug overdoses. As a voice in the EDM community and because the weather will be getting warmer and festival season is quickly approaching, we urge everyone to be safe and smart when attending these shows. There is no need to go so hard that you wind up sick and miss the concert entirely. We want to continue to enjoy these concerts together, and we can’t if they keep on getting canceled due to people overdoing it and ruining it for the rest of us. So, let’s tone it down a little bit and remember why we go in the first place: to listen to the music.

Images and news via – BBC News