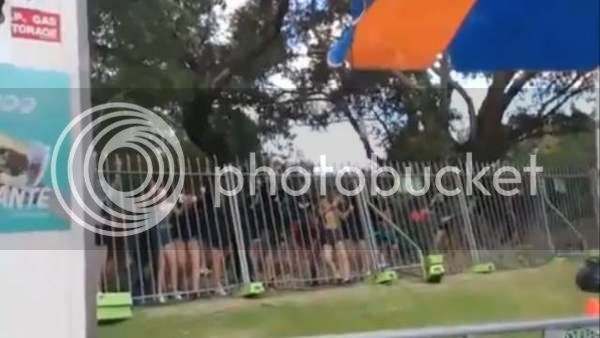 In what seems to be a recurring problem at music festivals of late, gatecrashers struck the Perth leg of the Australian Listen Out music festival. After reports emerged of fans forcing their way into the festival’s Sydney stop, video has popped up showing the same thing happening in Perth. Video of the chaos comes courtesy of , and shows the festival gates being pulled down as security tried to stop the intruders. Thankfully, there are no injuries to report from Listen Out Perth, but a security guard in Sydney wasn’t so lucky: a police statement notes that a guard was hospitalized with a ruptured spleen and internal bleeding, after being trampled. Other Listen Out stops (Melbourne and Brisbane), went off without incident. One can only imagine that Listen Out’s killer lineup, rife with up and coming talent like Zhu, Flume, and Schoolboy Q, is what incensed the crazed fans to take matters into their own hands. However, this doesn’t excuse trespassing and potentially injuring guards, and we for one, hope this alarming trend ceases.