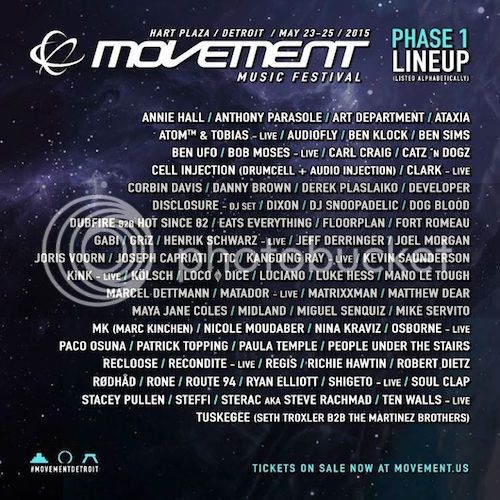 Detroit is often considered to be the birthplace of techno. The city where this whole scene all began. Fittingly, Movement Electronic Music Festival is a celebration of Detroit’s rich music history. The three day festival is held over Memorial Day weekend in Hart Plaza, Detroit’s legendary riverfront destination. Here, five outdoor stages will host the best artists in techno, house and hip-hop. The festival has developed a reputation as one of the best “underground” festivals around, and it is consistently showered with accolades and awards by various publications. It was named by Thump as the #2 North American festival that won 2014, and it as been called “Festival of the Month” by Resident Advisor for 7 of the last 8 years. With the announcement of Movement’s lineup, it is safe to say that the festival’s sterling reputation will be upheld in 2015.

The lineup features a few notable surprises, such as Snoop Dog, aka Snoop Lion performing as DJ Snoopadelic. British superstars Disclosure are also set to perform, as well as Skrillex’s less known collaborative duo with Boys Noize, “Dog Blood.” Techno artists are out in full force as well, with the likes of Richie Hawtin, Loco Dice set to throw down big sets, and the legendary Seth Troxler playing b2b with The Martinez Brothers. Detroit native Griz also made the lineup, and will be fresh off his new album’s release. Other notable acts include Art Department, Danny Brown, Dubfire b2b Hot Since 82, Joseph Capriati, Luciano, Route 94 and Ten Walls. The lineup is sure to excite Movement’s faithful fans, as it features a host of techno artists while pulling big names from other genres. You can buy tickets here for just $130 for a festival experience you’ll never forget.