With Glastonbury Festival officially over, attendants have left workers and volunteers with a daunting task. According to DailyMail, an estimated 1,650 tonnes of waste and 5,000 tents were left on the festival grounds, and now a crew made up of around 800 people must meticulously sweep Worthy Farm to remove a sea of trash.

Welcoming over 175,000 attendants, Glastonbury Festival took place from June 24 to June 28 and welcomed an impressive roster of artists including Deadmau5, Kanye West, SBTRKT, The Chemical Brothers and many more.

The photos below show the insane amount of garbage left behind by campers on the 900-acre site. According to the DailyMail, festival organizers are expected to spend a whooping £780,000 ($1,226,667) ridding the grounds of garbage. In 2012, the land was so decrepit they had to cancel the festival until the next year. 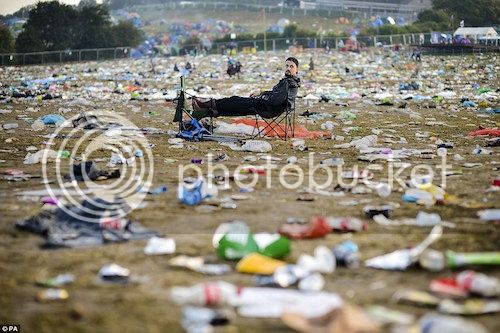