“Momentum” Has Potential to Mirror Reality, Entertain, and Launch Careers

The rapid rise of dance music over the past decade has undoubtedly stoked a fire beneath the behemoth of a cauldron that is the music industry. Over the past 5 years alone we’ve seen an unprecedented boom in both its economic growth and subcultural evolution; dance music alone is at an estimated worth of nearly $7 billion, and has spread worldwide like a passionate wildfire, sparking new a new life in the musical lives of the fans it reaches. As a result, the industry in general has seen a flood of eager potential participants, be it artists and producers looking to become the next audible pioneer, hopeful entrepreneur looking to introduce a new disruptive technology, or traditional workers who seek to push this well-oiled (albeit convoluted) machine along. As we all know, this isn’t so easy; those who consider, contemplate, aspire, or even dream of entering this space often lack a proper understanding of what it’s really like, where’s it’s really going, and how to get started. The answer may be right around the corner, and it comes in the form of Momentum.

Momentum stands a truly unique and honest platform for people looking to launch themselves into music, but not in any traditional method you might expect. No, Momentum is instead a series you will watch, one with a pseudo-realistic world, full-fledged stories, actors, writers, and a dedicated crew that’s planned out an amazing journey to take us on. This is what we need to inform the populous, not Zac Efron’s fluffy softened fantasy world in, We Are Your Friends – cultivating a career takes a lot more than locking hearts at 128bpm.

“Like many great musical artists, talent is cultivated, and becomes a product of its environment.”

The crew behind this scripted-TV series understood the mass interest in the potential behind We Are Your Friends, but they’re actually in the nitty-gritty reality of it all right now, and are here to focus on the reality of a world where you can be technically famous, and not make a dime; they’re behind the scenes of the fantastical promo videos and after movies we all consume that plant our views of a DJ or manager’s lifestyle in our heads.

Salt Pond Creative has created a world that focuses in on a New Jersey construction worker, Michael Morris (played by Michael C. Morello), who essentially overnights into the fast paced world of performance DJing and the nightlife. The series will track the progress, ups and downs, mistakes and recoveries, and interactions with numerous other characters that Morris will have, and it all will very closely relate to the real world. Imagine Entourage, but for music.

“Our take on a classic hero’s journey, explores a new dynamic of rags to riches through the challenges and advances in our modern day world. Our emphasis is on the viral nature of success and failure, showcasing its fragile, thrilling and volatile ride.”

Real life, current issues and entities will be addressed and included, making the experience all the more immersive. Now this is all well and good to know, but this is EDMTunes, our focus is on the music (you can get a plot synopsis and fat background information in so many other places). So what’s so special about the Momentum series as it relates to music, artists, and potentially you? 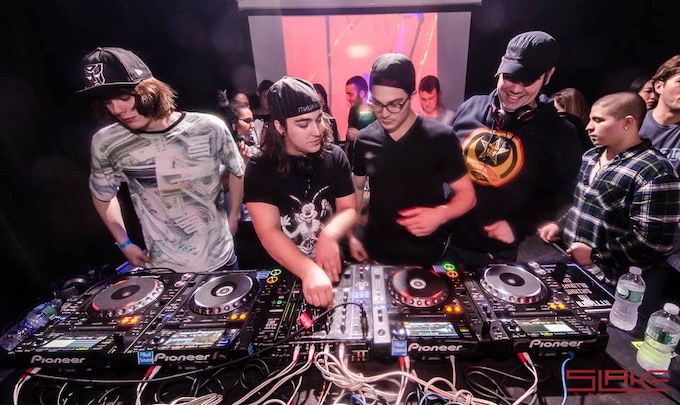 The folks behind the series have more than just story telling in mind. In order to encourage interaction, foster a community, and maintain a more organic experience, the music in the show will be provided by the viewers. No you can’t submit your favorite Skrillex tune. The idea is that if you’re making music, and you’re looking for a platform to have it shared to the world, this is something to chase after.

“We live in an age where you can be famous for something and really not be able to monetize it in any way, which is something that’s really unique to our generation.”
– Spencer Zabiela, Director

To populate the show with music, there will be a full submission system in place (you can email them now at: Music@momentum-building.com), and music will be carefully chosen to parallel the trends of what’s popular (or not) in the real world. This isn’t meant to simply have a soundtrack, the selected artists will be showcased and launched. So as people essentially develop the sound of this Michael Morris character, they’ll receive recognition.

“I think we’ve hit a point with music-discovery technology that it’s almost doing us more bad than it is good. Talented artists with truly unique sounds are too often overlooked and held back because, let’s face it, success in the EDM industry is heavily influenced by who you know and how well you can network.”
-Lex Houser, PR Director

This is where the experience of the team behind the show comes in handy. The network to get people involved and engrained in the scene is right at our fingertips, more importantly it’s right at the fingertips of artists who could really use the support. Lex Houser goes on to explain how this show is more than consumable visible content, “Momentum is a platform designed to propel these unrecognized artists into the spotlight and put their music in the ears of people who might not have given it a chance otherwise. This is an underdog story and we want that to translate to our viewers in more ways than one.”

Houser went on to inform us, “Its what we experience in this industry, put into this show. some of it almost to a T.” The example given is with the likes of  Ashlyn, form Daily Beat. In theory she could appear on the show, replicate her RAW series, whereafter a real life edition of the show could take place on a digital platform with extra content readily available — like a new artist featured in the episode. To let this hit a little closer to home, the trailer features a Montreal based artist, Frame.

With less than 1,000 followers at the time of writing this article, Frame could later be included in the show, interviewed or interacted with by people like Ashlyn, and then have it transposed into the real world, with real reach, and real growth.

This project is still in its Kickstarter phase, and needs donations to secure permits, venues, crew costs, transportation costs, and a host of other variables that must be accounted for.

We highly encourage you to head over to their Kickstarter page, check out their goal, read up on their goals, and don’t forget to peep the rewards of donation. Fully funding this project is crucial to its success, which could be crucial to the success of untold numbers of artists careers, or even the beginnings of aspiring business folk. If you can’t make a donation, spreading the word of its existence would be something greatly appreciated. Momentum is something we’re sincerely looking forward to — let’s not let We Are Your Friends stand as the lone piece of dance music content available to the masses, not when there’s something this special out there.