TIDALxDeadmau5 At Barclay’s Center In Brooklyn: Bringing People Together 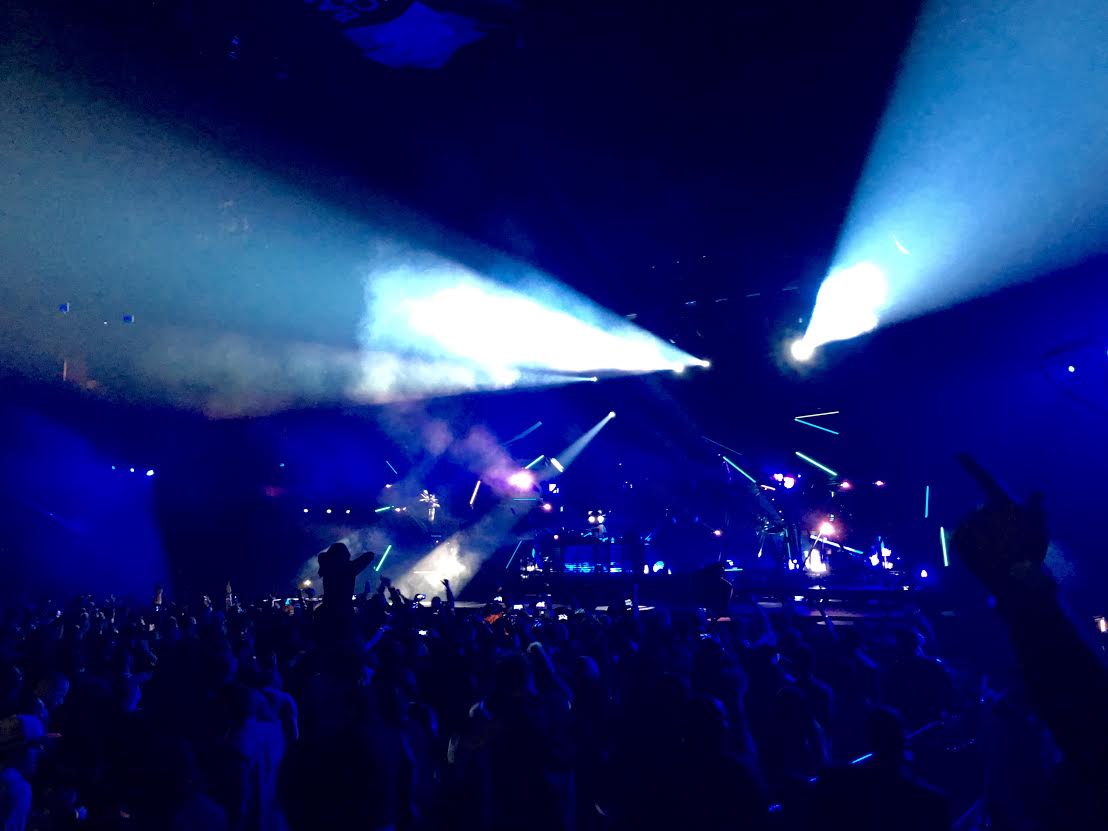 I didn’t really know what to make of the crowd at Barclays Center in Brooklyn. While we’ve all been to our fair share of big tent parties, there was a multicultural & socioeconomic mix at this show that I hadn’t ever seen in NYC. With rave kids skanking, club goers checking their phones, and a lot of Brooklyn natives hanging out with their friends, TIDALxdeadmau5 had a deeply different feel than any party I’ve been to.

The openers were a collection of lower-tier artists on TIDAL. While the execution was a little stilted and the audience was bored at times, I’m really glad TIDAL did this. Slonk Donkerson (takes the award for funniest new artist name I’ve heard in months), D.R.A.M., Justine Skye & The Cold Seas were acts I would never have seen without TIDAlxdeadmau5. While they aren’t the most polished, they’re young, hungry, authentic, and I can’t say I’ve ever heard indie rock, hip hop, trap, and pop on a bill with deadmau5. Since no one knew when Joel would come on, the openers had a larger crowd than usual, and people actually liked it.

The chief opener, Pusha T, is one of the only hip hop artists that feel as comfortable in rap as they do in EDM. The track we all know him from is the YOGI tune that got remixed by Skrillex & Trollphace a little over a year ago (embedded above). He did a good job getting the crowd hyped, but it kind of dawned on me that I’d never seen a hip hop artists be the opener for deadmau5. We had no idea what to expect, but after hanging out in the luxurious Barclays for a while, the room was amped to all hell about the set. And then we saw them roll it out. 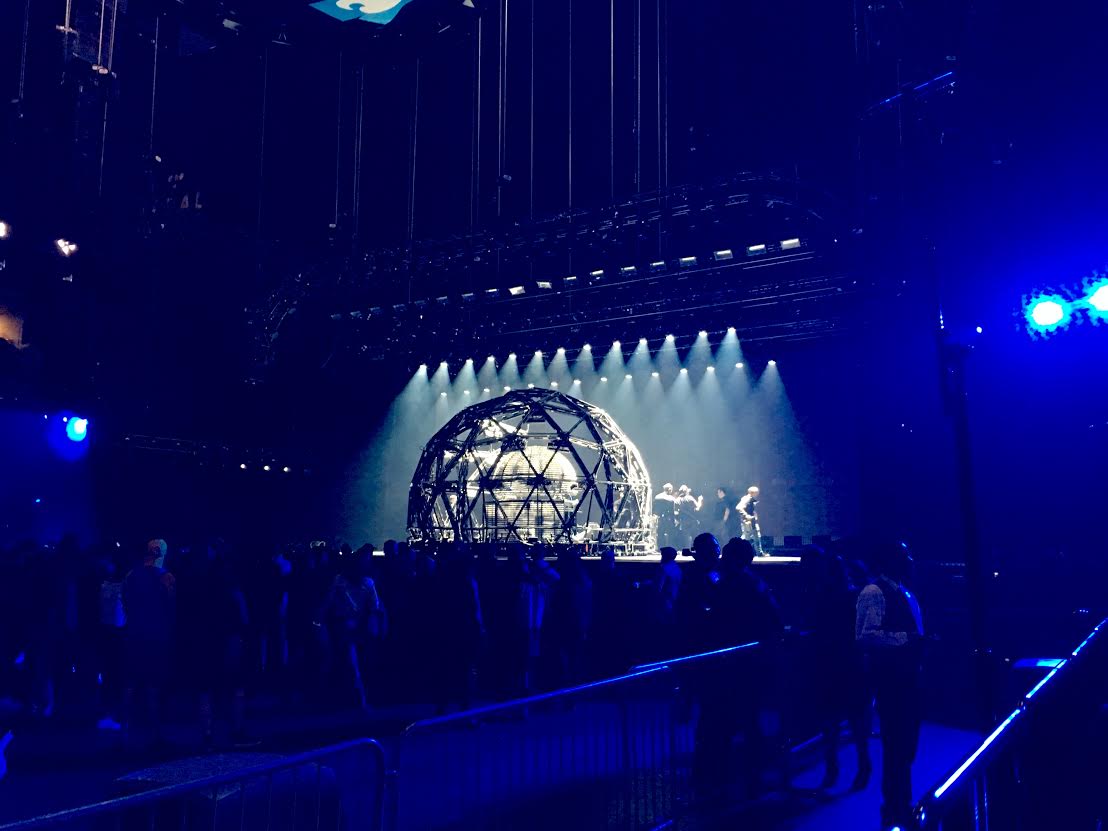 He brought the full rig. I don’t think any of us expected this, but the crowd surged when they saw it. Most of us expected a DJ set, and didn’t know if he was going to spin hip hop. But when the mau5trap got wheeled out, we knew it was going to be a night to remember.

His set was similar to his Governor’s Ball set from over the summer, but without any glitches. The rig is tuned to perfection, with what looks like a touch of lighting control on his end as well, so when he dove into his midi controller or some other personalized production piece, the lights shifted with him. The person I went with had never seen the mau5trap before, so it was a joy to watch Deadmau5 blow away everyone with how many moving pieces it had and how well it matched the music.

deadmau5 tracks are critical to the EDM generation of dance music. I think most people who partied between the years of 2007 and 2012 have a memory attached to one of deadmau5 dozen really great singles, like “Strobe” or “I Remember“. I previously thought only retail dance music fans were into it, but the Brooklyn hip hop crowd was loving every second of it. People on their feet for the entirety of his set, and he didn’t disappoint. Joel was focused, perfectly aware of the room, and proved why he gets paid as well as he does. He played with a bunch of melodies right before our eyes, warping them using his custom-set up as only he can. He might be the last DJ in North America who has a permit to play deep progressive & electro, as he’s the only one who can do it well. Entertaining start-to-finish. But, because it was Deadmau5, I knew there had to be at least 1 moment of trolling. Boy did he give it to us. 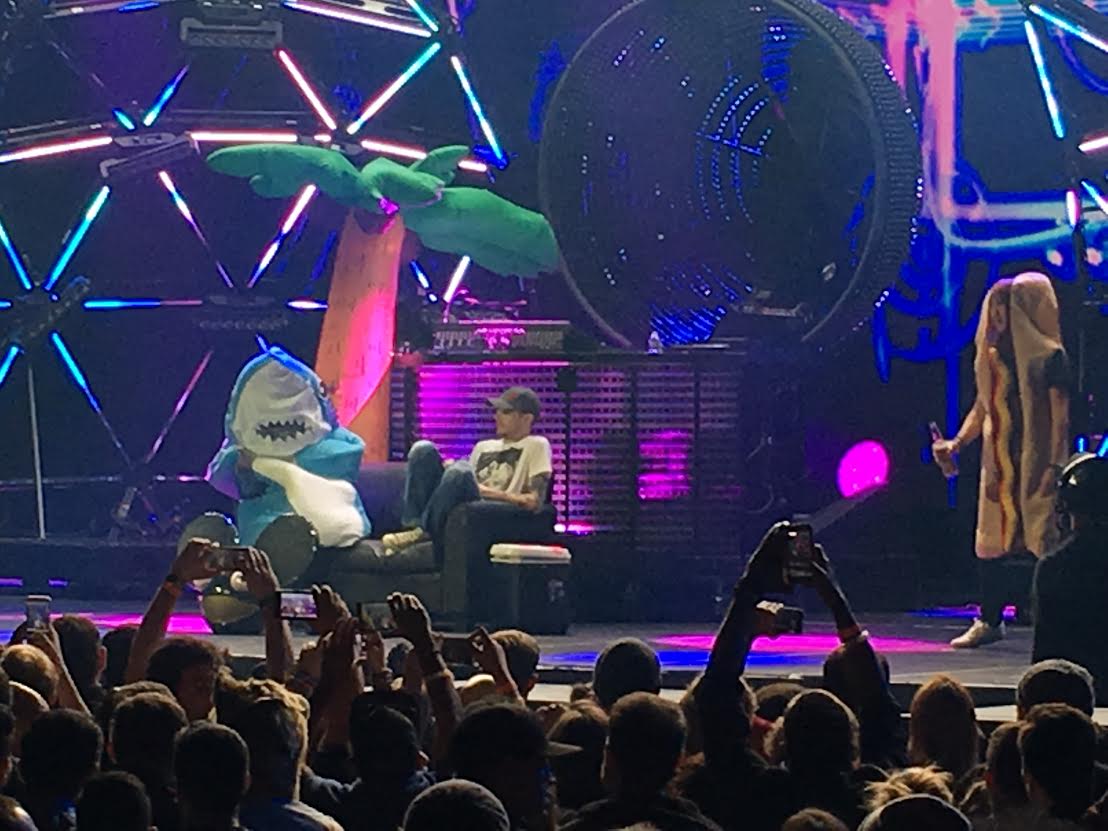 Yes, that’s him, sitting on a couch, with what looked to be Left Shark from the Super Bowl, and another woman in a hot dog mascot outfit. About 80% through the show, he decided to remind everyone what everyone else does when they mixed. He cut his live production, mixed from his signature sound into a somewhat tropical, somewhat deep house track, and then proceeded to let it ride. He came out from behind the DJ decks and grabbed beers from the cooler, and sat on the couch (both of which were set up by roadies, mid-set). He then proceeded to drink beer, take a bow and let the track play. A brilliant jab at his competition, before getting back behind the decks, lighting 7th cigarette of the night and closing out brilliantly.

Much has been said about TIDAL, but I think this series of offerings, if managed properly, could give them a fresh new face. If they keep pairing headliners with up and coming artists, the value proposition of TIDAL may increase, as people realize these are parties to attend. If Jay-Z & TIDAL is smart, they’ll make em free for TIDAL members, and begin to use the Barclay’s & Hova’s intense rolodex to create unforgettable evenings. The party was more racially mixed than anything I’ve seen in NYC this year, and there were no fights or wacky drama bullshit to disrupt the event. Does it get better from here? Only the future will tell.