Last weekend, Buku Music & Art Project concluded its fifth rendition of the festival. Featuring an incredibly diverse lineup of acts from dance music, hip-hop, indie and everything in between, Buku was a music fans dream. Lest we forget the street-team style dance performers the Buku Breakers and the incredibly unique art that added a touch of New Orleans flair to the experience. Now that we’ve had a week to reflect and digest the experience in New Orleans, here are the top five highlights of Buku 2016 that will convince you that Buku Music Music & Art Project is a must-attend festival in 2017.
PrevNext

Buku is located on the site of Mardi Gras World, directly adjacent to the Mississippi River. Two of Buku’s four central stages, The Ballroom and The Float Den, are located inside the warehouses that are used to construct and store the floats and other props that bring Mardi Gras to life. Fully enclosed indoor stages at a festival is something you don’t see very often, and Buku utilized the Mardi Gras World location to capitalize on that rare feature. In addition, it’s position provides an unmatched view of the Mississippi River with the beautiful Crescent City Connection Bridge in the background. Finally, you won’t find any stage comparable to Buku’s Back Alley or the S.S. Buku reserved for VIPs only. These two stages are only made possible by virtue of the design and setup of Mardi Gras World.

The lineup at Buku this year had a little bit of everything. The main Power Plant Stage saw artists from almost every different genre, including CHVRCHES, Above & Beyond, Kid Cudi, Future, and Pretty Lights as a live band. In the Ballroom you could find AlunaGeorge, Rae Sremmurd, Purity Ring and ASAP Ferg. The Float Den stage hosted the majority of the festival’s big name dance artists. On Friday, Tchami, Baauer, Deorro and GRiZ graced the stage, while NGHTMRE was followed by the likes of What So Not, Feed Me and Nero on Saturday. The Back Alley featured an incredible array of the funkier and deeper sounds of the festival. You could find “the Queen of rare groove,” local New Orleans artist DJ Soul Sister spinning vinyl on Friday, along with Jai Wolf, J Philip B2B Killy Frenzy and Art Department. On Saturday, CRWNS, SNBRN, Sam Feldt, Lee Foss and Claptone brought spirited performances that kept the Back Alley bumping all festival long. Finally, those lucky enough to be VIP for the festival were treated to private performances by Illenium, Sweater Beats, Prince Fox, Louis the Child and Autograf.

Upon arriving at Buku at the start of day one, the wall of graffiti you see above was blank. Throughout the festival, numerous graffiti artists stood on each of the platforms, climbing up and down creating a live mural. The artists could paint anything they felt like at any moment, and frequently added their own touch to the work of their fellow artists. Walking past The Live Gallery while walking between stages was an experience every single time because there were always new additions to behold each time we passed. Following the conclusion of the festival, each segment of the wall was sold in an on-site live auction for charity, giving Buku attendees who donated the winning amount a one-of-a-kind work of art to commemorate their experience.

The Back Alley stage was absolutely the coolest festival stage you will ever come across. Located in a tiny space behind both warehouses, the Back Alley is so small that it can probably only hold up to 1,000 people. To the side of the stage was a full service bar with several tables with a seated viewing area so attendees could eat, drink and rest their tired legs. The Back Alley appeals most to those who just want to groove out and never stop dancing. If you are a fan of pure progressive, deep, and the newer future house sounds, you will find yourself at home in the Back Alley. 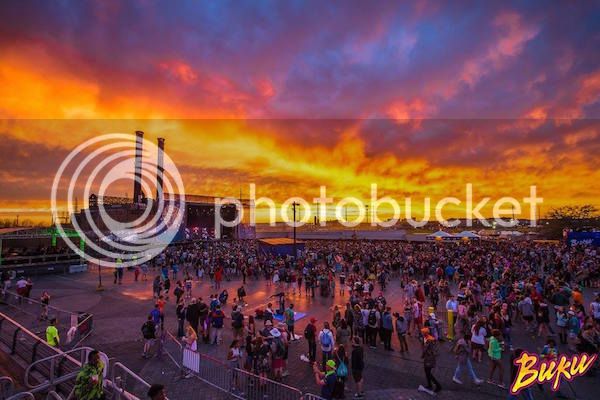 While a sunset does not technically count as a highlight of the festival itself, the view attendees were treated to on Friday evening was a sight to behold. New Orleans is famous for their unpredictable weather patterns, leading to the breathtaking scene you see above. This year, it was predicted that the entirety of Buku weekend would be plagued by rain and thunderstorms. However, at about 5pm on Friday the rain stopped completely and the sky opened up, revealing a burnt orange sunset directly behind the main stage. The sunset comes in at number one on this list because it truly set the tone for the rest of the festival. Attendees stood in aw watching as the clouds parted, and it was clear that the moods of attendees completely changed. Following the shift in weather, it was difficult to find a single person without a massive smile on their face. Buku Music & Art Project 2016 was a magical experience, and we encourage all of our readers to pay a visit to New Orleans at least once for this special festival.