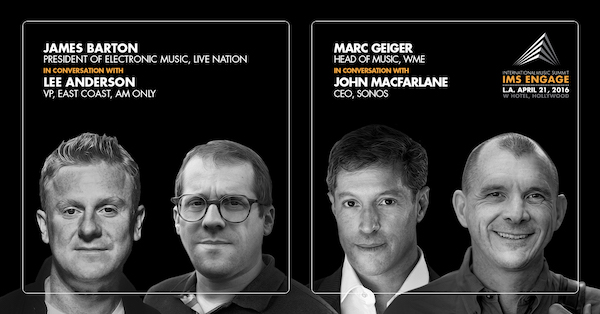 IMS ENGAGE is back for it’s fourth round of conversations between leaders from the worlds of finance, technology, music and media to discuss the amazing growth of electronic music within the industry. This annual event, taking place on April 21st at the W Hollywood Hotel in Los Angeles, will feature discussions between some of the music industry’s most influential players who represent ground breaking companies like Live Nation, WME, AM Only/ Paradigm Agency, and Sonos.

The first conversation features the Head of Music of one of the world’s premier agencies -WME- Marc Geiger, and CEO of the pioneering audio company Sonos, John MacFarlane. Geiger predicted the success of electronic music, which is why WME was the first company to open an EDM division. MacFarlane co-founded Sonos, a smart speaker system connected over WiFi that allows you to stream your favorite music throughout your entire home.

The second pairing will present Live Nation’s President of Electronic Music James Barton, in a conversation with AM Only’s East Coast Vice President Lee Anderson. Barton is responsible for millions of electronic music ticket sales at Live Nation while Anderson is well-known for taking acts like Skrillex, Zedd, and Disclosure from relative obscurity to headlining international festivals and arenas

For the past three years, IMS ENGAGE has featured the best of the best when it comes to debates on electronic music. This year is no exception and attendees should expect a great show filled with passionate discussions and insight into the behind-the-scenes world of electronic music. Tickets can be purchased here.