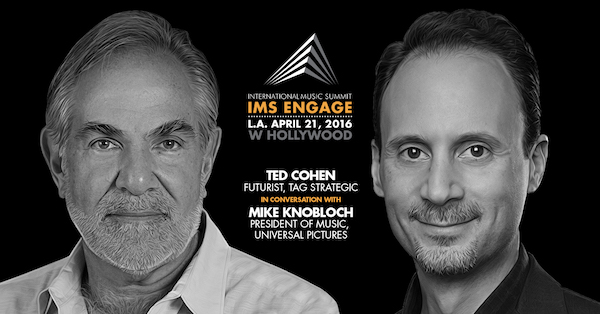 Ted Cohen is an expert when it comes to digital music. A veteran in the entertainment industry, Cohen has held management positions at some of the biggest media companies in the world, including EMI Music, Warner Bros. Records, and Philips Media. He will be joined in conversation with the President of Film Music and Publishing at Universal Pictures, Mike Knobloch. Knobloch is a staple in the movie industry and has overlooked musical direction for iconic films like Titanic, Avatar, and The Bourne Identity.

The second pairing includes American record producer, Arthur Baker. Baker has worked in remixing amazing artists like Pet Shop Boys, Cindy Lauper, and Bruce Springsteen into dance-worthy hits. He will be speaking with John Singleton, an Oscar nominated director known for films like Boyz N The Hood, Poetic Justice, Rosewood, Shaft, and 2 Fast 2 Furious. Singleton was nominated for Best Director at the age of 23, making him the youngest nominee in the award’s history.

The two pairings will join by an already elite lineup of industry specialists to discuss the importance of electronic music throughout the entertainment industry. IMS Engage is scheduled to take place this Thursday, April 21st in West Hollywood.

Check out tickets to the event here.