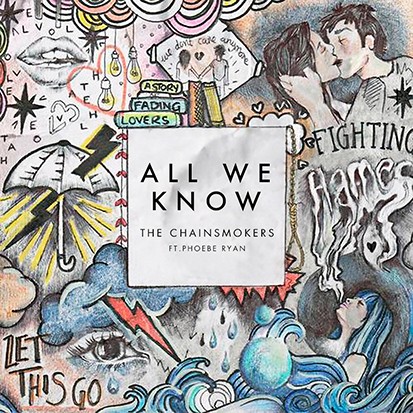 The Chainsmokers – All We Know
ft. Phoebe Ryan

New music by The Chainsmokers always gets the whole world excited. This newly released track “All We Know” has stunned their fans once again with a romantic vocal track featuring Phoebe Ryan and the duo’s very own Drew Taggart. Drew sang the male vocal part in their previous single “Closer” feat. Halsey, which is the #1 single on Billboard right now.

The new track seems to target fans struggling with heartaches, expressing the grief of losing a loved one with lyrics such as “we’ve fallen apart, still we hold together”. Using a subtle melodious guitar track to accompany the soft and mellow vocal track, the duo really hit the soft spot of listeners who’ve adored R&B and pop rock genres in the 2000s with a yearning for fresh dance music.

The Chainsmokers – All We Know ft. Phoebe Ryan | iTunes

The Chainsmokers seem to have their own favourite line from the song judging by this tweet:

We’re past the end so we chase forever #allweknow

What’s your favourite line in the song? Let me know in the comments down below!