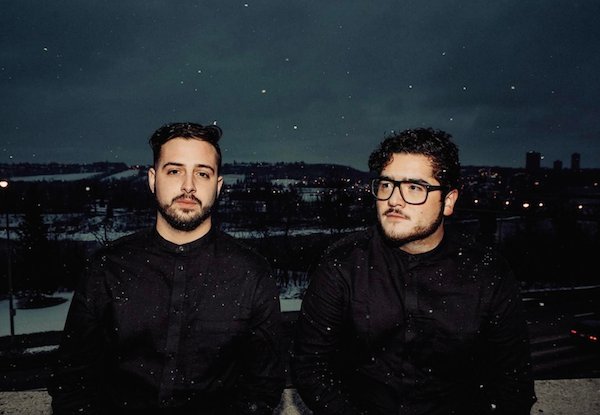 Boombox Cartel is a trap, bass and dubstep infused duo based in Los Angeles made up of Americo Garcia and Jorge Medina. The two met in high school in Monterrey, Mexico through a mutual friend who introduced them because of their shared love of music. Not long after, when school wasn’t going very well for the two of them, they both moved to Minnesota to study music at McNalley Smith in St. Paul. After realizing they truly had the potential to make a career in music, they moved to Los Angeles and Boombox Cartel was born. With musical influences coming from all directions, Boombox Cartel has enjoyed a two-year run of successful and very diverse releases including ‘B2U,’ ‘Aftershock,’ and ‘Supernatural,’ culminating in the release of their debut Cartel EP on April 21st. We had the chance to sit down with Americo after his set at Shaky Beats Festival in Atlanta, Georgia.

Boombox Cartel just released the Cartel EP a few weeks ago, featuring an impressive range of musical styles. How do you approach going to the studio making all that different music and then selecting those songs for just a 5-track EP?

Jorge and I come from an everywhere musical background. We were in hardcore bands, indie bands, making pop, making big room house, making tribal stuff, dubstep, moombahton. So, we’ve been making a little of everything, and for us, sometimes we try and make a trap track and end up making a pop banger. Or we try to work on a pop record and end up doing an underground super crazy weird thing. It’s just like, we write music and whatever happens, happens. We probably make like 20 tracks and sometimes we’ll like two of them. And then we just keep making demos and whatever we like we set it aside. For us to go a little bit out of the bubble is super easy, we already do that. For us it’s hard to stay in that trap bubble, or in that EDM bass bubble. We work on all weird shit, a bunch of multi-genre stuff.

Those limitless boundaries must help you both stay creative:

Exactly, the whole point of the Cartel EP was to deliver something that has a variety, that has multiple musical styles but tells one story. So, we kind of wanted like a little book, you have the high part, the low part, and the heavy part. So that was the goal with the Cartel EP.

You played the fourth annual EDC Mexico—What’s it been like to see this scene and a festival like EDC go down to Mexico and blow up like it has?

Mexico is just starting to pop off. It was our second EDC Mexico, and from seeing it last year to seeing it this year, it was quadruple the size, the people, and the artists. They’re a lot more into the sound now, but EDC holy shit man. It’s crazy, them taking that festival to different parts of the world and putting kids together that share the same love of music.

And the second time around people were probably there just to see you play:

Right, because after that more people in Mexico started following us. We’ve only played in Mexico twice, both EDCs and that’s it. We don’t play Mexico just to play Mexico because we’re from there. We don’t play any show, every show we do we’re going to make sure it’s a helluva show. And we’re going to put in our best performance and we’re going to put in the best of the best, so EDC Mexico was really special for us this year. I think this last EDC Mexico was my favorite show ever. It was like 14-16 thousand people there during our set time.

Can you talk a little bit about the issues with the United States and Jorge’s Visa?

With the current government, you guys know how it is. There are pros there are cons, there’s negativity thrown out, people being divided. It’s just been pretty rough. A lot of people are getting their visas revoked, not being able to renew their visas because their work isn’t big enough or for whatever reason. It’s just a weird black area that not many people know about. Me being born literally on the border in Laredo, Texas, it was all border talk. Oh, so and so drug bust, so and so got deported, so and so got their visa. Congrats. It was just border talk, border talk. It’s a big deal. Now they’re cracking down on the wrong people, that’s what I feel. Some engineers at Google that are programmers that are changing lives in the world, they’re not even getting in. It’s just hard for us to work with the government; we’re trying to do it right. And it’s super hard to do it right too, we could hop a fence and get here quick, whatever. But, even if you want to do it right, it’s like you can’t. It’s pretty upside down; it’s in a weird area right now.

Will we be seeing you two playing together in the US anytime soon?

Well we’re projecting for EDC Vegas. We have immigration lawyers on Jorge’s case just to get him over here ASAP, but yeah we hope its soon, we hope it’s really fast.

What does the skull & bones theme in your album art represent?

Mexico, our background. It just represents living in Northern Mexico. About four years ago it got pretty dangerous when people started cracking down on these bad guys, and you had to go home literally before 9pm hearing gunshots in the streets. The color red and the skulls represent Mexico, and its power to the people, because people can change the entire country. It doesn’t matter who our president is, we’re the ones who are in charge. Mexico’s government has always been corrupt, but the people always find a way. And they always find a way to make it positive and nice. And the US is in this situation right now. We’re all going to figure it out, it doesn’t matter who our president is. We’re all going to figure it out and we’re all just going to keep doing what we want, keep doing our thing.

On labels refusing to pick up 2015 megahit B2U:

Nobody wanted B2U. Skrillex (OWSLA) didn’t like it; Diplo didn’t want it. And we were like well we like it so we’ll just put it out for free. 4-5 million plays later and then Skrillex starts playing it. And it’s like, oh now you want it. So as much as I love all these labels, as much as I love Mad Decent, don’t worry about labels. Just do your shit, put it out for free. A good record is a good record. Don’t worry about labels. (Especially with streaming these days) it’s so easy. Get a Tunecore account; put your music on Spotify for $3 a month or some shit. Don’t worry about labels. Labels are like the cool kids thing, nah. Start your own shit, that’s where its at. You’re a movement, that’s what I recommend to all the upcoming producers.


On a possible tour in support of the Cartel EP:

I don’t know how much I can say, but yes. Big shows coming up toward the end of the year, we’re prepping something up, but all unannounced as of now.