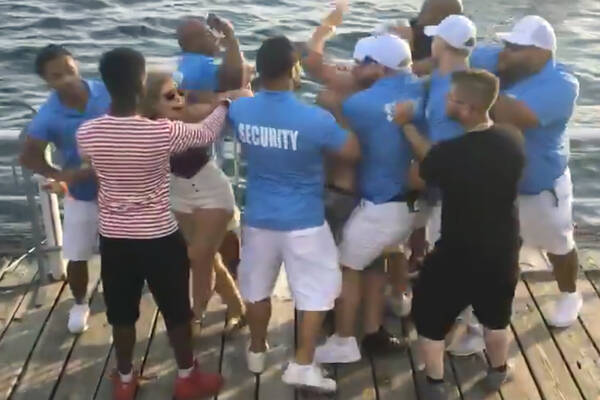 One of the best aspects about going out is knowing that when you are in a party atmosphere you can count on ample security to keep you safe. On occasion altercations can occur, and with the right training the security guards will step in to ensure that the intimidating situation is dealt with efficiently and quickly before any injuries occur. Recently, Cabana Pool Bar has been put on display as videos have surfaced online demonstrating severe forms of violence in between a partygoer and a bouncer –  however, the security team are the ones under the microscope as they did not serve their primary duties to protect the attendees, but instead insue injuries upon them.

On July 30th, 2017, Cabana Pool Bar located on 11 Polson Street in Toronto, Ontario, was faced with a brawl that involved an extremely physical encounter between an attendee and a security guard. Many videos and witness statements have arose on the Internet which resulted in the police investigation currently taking place.

Josh Gomes, a partygoer that was involved in the physical altercation, told CTV News Toronto that the incident ignited when his friend, Alvaro Cuadra, got into an argument with a group of security guards when one of the bouncer’s allegedly got violent and confrontational with his girlfriend because she was smoking a cigarette.

The incident escalated as Gomes and his friends chose to intervene when they witnessed one of the security guards put their friend in a headlock – in which Gomes described as “when the commotion took a step in another direction” when he threw a cup of water at the bouncer because a group of them were beating his friends.

When the cup of water was thrown, and the brawl progressed, it has been reported that one of the security guards “unleashed” and pursued to punch Gomes in the head. As the video demonstrates, the bouncer and Gomes take a moment to pause and stare at each other. Gomes has reported that he asked “What was that about?” in which the bouncer responded “What’re you going to do?”. The suspenseful event continued from there.

“I didn’t see it coming so everything was in a daze. There were punches coming from a guy who’s a lot bigger than me. He’s supposed to be bouncing the place and yet I’m fighting him for no reason.” Gomes reported.

Cuadra decided to take matters into his own hands and confront the bouncer about the situation at hand – that’s when the security guard retaliated to do the same.

“He actually grabbed my girlfriend in a really aggressive manner and I approached him and said, ‘Don’t touch my girlfriend like that. Once I did that, another bouncer came up from behind and punched me.”

Gomes and Cuadra have both disclosed that they felt as though they needed to defend themselves as a group of four security guards became involved in the commotion.

“They kept beating me. That was at least another four minutes. I just kept protecting myself and my girlfriend was near me screaming for them to stop, but they didn’t stop,” Cuadra said.

Recently, a second video, seen below, has been circulating online through social media channels such as Facebook. As many video clips do not demonstrate the entire course of events, this second clip acknowledges that fact as it does not appear to show Cuadra involved in an altercation with multiple security near the event venue’s docks. He continued to claim that he was allegedly forcefully brought to the back of the venue, out of the sight of all the event’s security cameras, where bouncers continued to beat him.

INK Entertainment, the well-known Toronto company that’s in charge of throwing events at the infamous pool bar, has confirmed that the incident is now in the hands of the police as Gomes has made an official statement with the station. INK Entertainment has released the following statement as well as looking into the video evidence featured above:

“Cabana takes incidents such as this one very seriously,” the company said in a written statement provided to media. “We are cooperating with the Toronto Police Service so that they can understand the entire context of what took place, including the customer conduct that led to the altercation. Our priority is to ensure that our venue is a safe place for everyone, including staff and customers,” the statement continued. “This was a very unfortunate incident.”

Today, the pool bar has released a second statement, seen below:

“We are extremely troubled by the incident that took place at Cabana Pool Bar on Sunday, July 30. During the course of the police investigation, staff involved in the incident will not be working or attending Cabana Pool Bar or any other INK venue. Further, INK Entertainment has contracted the services of a third party conflict management and de-escalation firm comprised of former law enforcement trainers, who will provide an updated course to all security personnel on-site. Cabana Pool Bar has a long history of providing high levels of safety and security for our guests and staff; we are taking the necessary steps to ensure that safe environment. In addition to co-operating with the investigation, Cabana management will meet with each staff member to reiterate that guest safety is paramount. Any changes needed at Cabana Pool Bar that we identify or as identified by the investigation agencies will be implemented immediately.”

The physical altercation resulted in specific doctor’s orders for Cuadra and Gomes to stay home from work for two days – both individuals suffered from bruises on their jaws, foreheads and cheeks, not to mention Gomes was allegedly spitting out blood for the remainder of the day of the incident.

The investigations are still underway but one thing is certain: by definition, a bouncer is ‘a person employed by a nightclub or similar establishment to prevent troublemakers from entering or to eject them from the premises’ and in the future, we hope to see them follow that explanation more precisely.