Lost Lands Music Festival, held in Thornville, Ohio from September 29 – October 1st at Legend Valley Concert Venue was a bass music event of epic proportions. Featuring basically every heavy electronic artist in the industry imaginable, 27,000 bassheads from all over the world flocked to Ohio for three days of headbanging mayhem. Nearly everything about the first year festival was perfect, from the excellently detailed theme, the powerhouse lineup, the staff, and even the fantastic participation of the crowd get a shoutout in this review.

It’s an incredibly challenging feat for a festival to get everything right; often times there are not enough water stations, the staff is rude and unhelpful, or the lines to enter are far too slow. These things were rarely an issue at Lost Lands, and while there was one potentially disastrous delay on night two, the Lost Lands staff responded swiftly to get the festival back up and running in a timely manner. Thank you so much to Excision, his team, the performers, all the hired staff, and everyone in attendance for making Lost Lands’ first year an incredible experience and incredible success. We can’t to be back next year, read below for our favorite parts of this incredible festival. 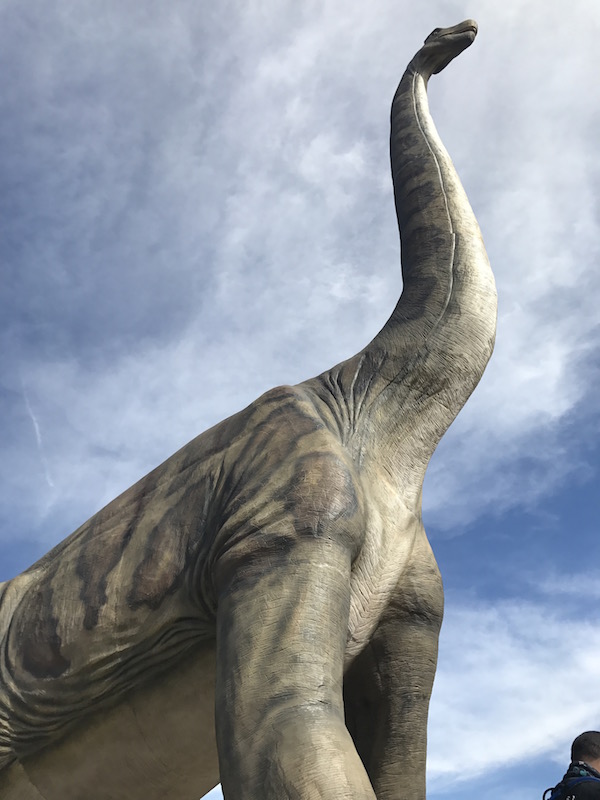 Giant f@#&ing dinosaurs. Everywhere. The event poster flawlessly advertised a fascinating prehistoric age theme complete with Jurassic Park inspired artwork, as well as a statement in the corner that simply said “Giant f@#&ing dinosaurs.” Upon seeing that inclusion on the poster, I really did not know what to expect, but upon arrival I realized it was no joke at all. There were literally giant, extremely realistic dinosaurs all over the place. The brontosaurus overlooking the main stage (pictured above) was no shorter than 100 feet tall, and the T-Rexes on either side of the Prehistoric Paradox stage had to be at least 50 feet tall. Additionally, there was not a whole lot of glam attached to this festival, which played into the theme in a positive way. Legend Valley is a hilly, dirt road filled field surrounded by trees. Absent from the setup were gaudy decorations and lights throughout the trees. Rather, being surrounded by nothing but dirt, grass and dinosaurs gave attendees the effect that they were actually walking around in the Prehistoric Era. It should be noted that the stage production was absolutely next level. So, while the grounds were as prehistoric as could be, there was nothing prehistoric about the epicness that was occurring on each stage. 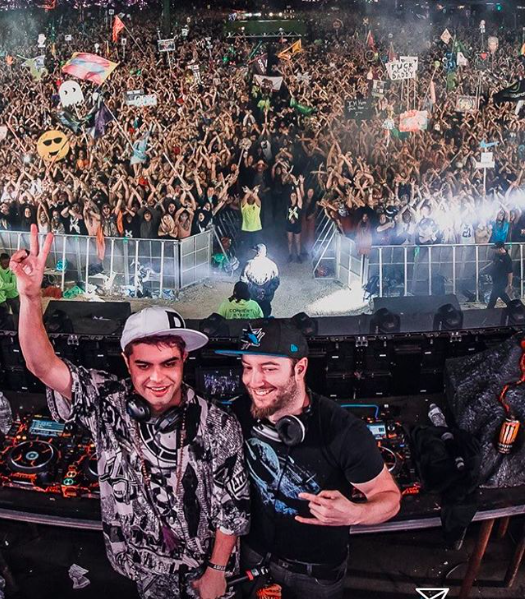 Just a couple years ago, a lineup filled almost entirely with bass & dubstep acts was unimaginable. In the past, festivals would reserve these acts for a smaller side stage where only the wild and craziest members of the audience would venture to to get their headbanging fix. The bass and dub movement has grown quickly in the years since, largely on the back of Lost Lands host Excision himself. Many of the artists featured on the lineup have come up through the scene together, making Lost Lands truly a celebration of bass music’s accomplishments over the years. Datsik said it best on his Instagram account; all of these artists have spent years and years touring by themselves trying to make it, and this festival represented the moment bass artists could rejoice and finally declare they’ve officially made it.

Ghastly represented one of the more house music fueled artists on the lineup, but he still certainly brought the heat. Zeds Dead toyed with the crowd, playing heavy beats from a multitude of different genres, flawlessly keeping the energy high following the delay. Sullivan King was probably the most unique artist we saw, jumping onto stage with mic in hand aggressively screaming while he shredded his guitar on top of vicious dubstep drops. Figure B2B Midnight Tyrannosaurus might have been the most aggressive set of the weekend, and it came at 5:30pm on the first day. Seven Lions was the special guest of the weekend, playing a far heavier set than many would expect, while also fitting in his standard melodic dub style that we all know and love. Snails has an album coming out in just under two weeks, and we definitely got a taste of the absurdity that will be officially revealed on October 20th. One of the concerns heading into the weekend was how well the artists would be able to stand out from other artists considering this was an all bass music festival; Rezz made it clear that her style is her own, playing all original music and showing that gender discrimination has no place in dance music. Finally, the one outlier of the entire lineup, future bass extraordinaire Illenium. Many wondered why he had landed on this lineup, and he proved any doubters wrong, playing one of the heaviest sets of his career, including a monster unreleased collab with Kill the Noise that you can view below. 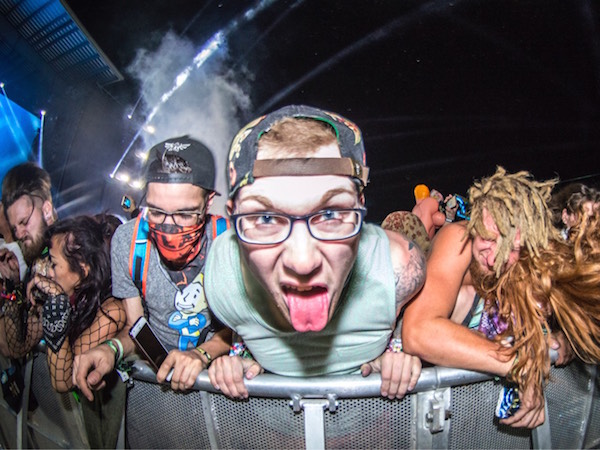 The beauty of a festival that features only artists from similar sub-genres was the similarities in taste among members in the crowd. Lost Lands brought together one of the best festival crowds we’ve ever seen, simply through the love of heavy bass music. Every single person in attendance at Lost Lands went to Ohio to hear the heaviest music in the electronic scene, and as a crowd they certainly lived up to expectations. An energetic and lively crowd is a key factor in helping a performer determine what to play next, and there was absolutely nothing off limits for this crowd.

Having had the opportunity to speak with several artists, a conversation with Figure stood out the most. He was slotted playing B2B with Midnight Tyrannosaurus at 5:30pm on day one, and definitely played one of the most aggressive sets of the weekend. He mentioned a moment during their set when the two were discussing whether they should tone it down a bit and play some house, ultimately electing not to do so, citing that the crowd was ready for anything they might have up their sleeves. 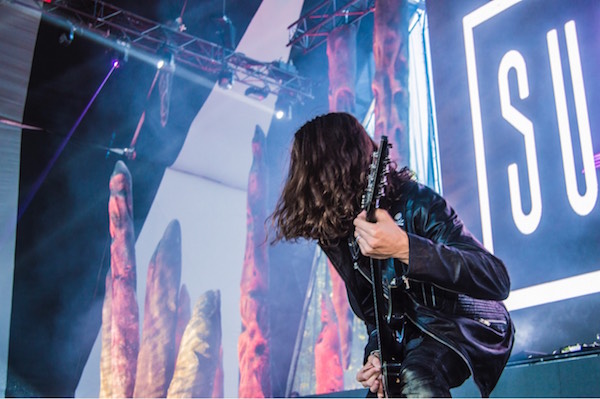 We would not be doing this festival justice if we did not mention the phenomenal live performances that occurred throughout the weekend. We already mentioned Sullivan King, Destroid and Illenium as three of our standout artists from the weekend, and they are all live electronic performers. Live instrumentation is a massive part of electronic music these days, and allows listeners to feel the same energy they feel from electronic music, combined with the nostalgia of the music we’ve all listened to in the past.

Destroid, made up of Excision, Downlink, and KJ Sawka lit the Prehistoric Paradox stage on fire, literally. While their set only lasted 45 minutes, it was easily worth ranking them in the tops of all performers at the festival. Prior to discovering electronic music, any bassheads came from a background listening to metal music, that’s where Sullivan King comes in. Combining the best of both worlds in metal and EDM, King was absolutely merciless, running through his heavy metal remixes, singing and shredding along himself.

Year one of Lost Lands Festival a massive success and there’s no doubt years two, three, four and beyond will continue to raise the bar. Excision has been around the festival scene for quite some time, and the man knows what he’s doing. We’re truly excited to see what is in store next year, and can’t wait to see the result.

Extra shoutout to all the individuals that helped make Lost Lands a personal festival favorite including Ben Steefel, Danny Williams, Chris Carpenter, Anthony Bullis, Nolan, Jacob, Ali, Zach, and all others I encountered throughout the weekend.