As most of you already know, Skrillex dropped his highly anticipated remix of Kendrick Lamar’s “Humble” a couple weeks ago. His fan base went crazy and every blog blew up with the news, but up and coming producer Medasin, was not too happy when he heard the remix because of noticeable similarities to his own track “Territory,” released 8 months prior to Skrillex’ remix. Medasin started the conversation by tweeting at Skrillex a simple (and now deleted), “ouch Skrill…ouch,” affectively calling him out for copying parts of his track. Skrillex has since claimed that he had never heard “Territory” prior to seeing Medasin’s tweet. Medasin reaffirmed his position that the songs are too similar to be coincidence, leading up to another pot-stirring moment in this saga.

At a recent show, Medasin filmed his crowd as they chanted “Fuck Skrillex! Fuck Skrillex!” showing their support for the originality of his work. While there is definitely no proof that Skrillex intentionally copied from “Territory,” the two artists have spoken on FaceTime, and they now follow each other on Twitter, presumably meaning they are hashing out the issue in private. While Medasin did not start the chant himself, he posted the video, and followed up by saying it was just a funny moment considering how much of a legend Skrillex is, and did not have anything to do with his feelings toward the copycat controversy. If you have not compared the two songs yet, you can hear both below, and you can also see the video of the chant for a good laugh. 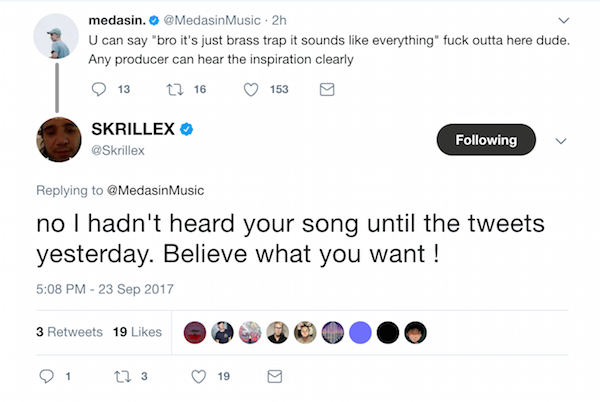