Remember when Porter Robinson sent out a tweet in January disowning most of the music he produced? In case you missed it, here is the tweet declaring only eleven tracks canon. 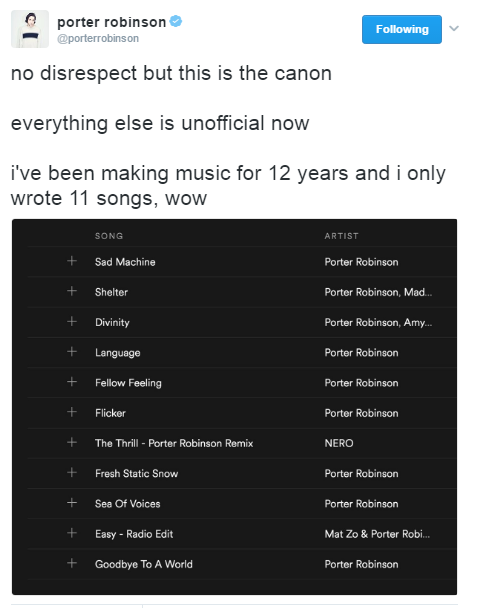 Well fans of Porter’s other music must fret no more! You’ll still be able to hear Porter play out more than 11 songs in his sets. In a recent article published in the Miami New Times the star EDM DJ and producer opened up about the infamous tweet, calling it “an impulsive thing,” and saying he doesn’t “really stand by it.”

Porter’s rise in fame and struggle with depression

It is no secret that many artists, not just musicians, struggle with depression. Robinson has been incredibly candid about his own struggles and how he has dealt with them during his meteoric rise in fame. Releasing hits like ‘Get Brain‘ and ‘Say My Name‘ in 2010 before he turned 19 and most recently putting out studio album Worlds collaborating with Madeon on “Shelter” has had Porter on the top of many people’s charts for years. But all the fame, expectation and personal change over the last six years came to a head this January.

Porter claims at the time of the tweet he was “ready to disown everything except those select few songs.” He also put out a series of snapchats explaining how serious he was. In the Miami New Times article Robinson expressed it more articulately.

“It was a really intense moment for me, and I’m a fragile person and was going through some difficult stuff at that time. I was angry and having feelings of self-disgust, and I was wanting to only have myself represent as an artist by what I feel is my best work.”

We can all sympathize with Porter’s fight against depression and the negative feelings that led to his January tweet. But it is also refreshing to hear Robinson also express his sympathy for the fans. “If an artist I liked disowned songs that meant a lot to me, I would be pretty hurt by that,” expressed the young producer, showing us all the intimate and meaningful connection he has with his fans.