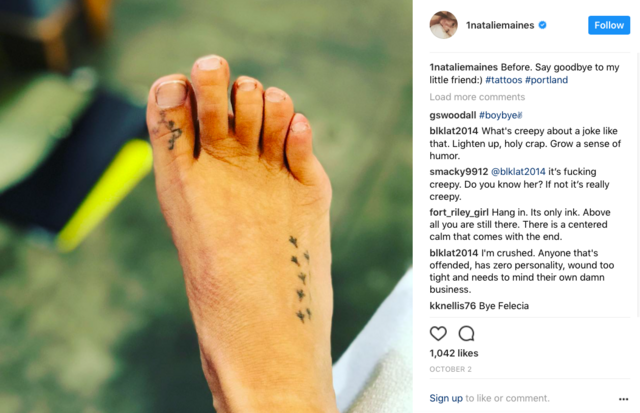 Maines embraced the Ancient Greek symbol for strength, freshly painted onto her skin, until she posted her proud possession via Instagram. While the symbol Maines chose may be a reminder of her inner warrior, it’s quite the stretch. Yes, Pinterest confirms Natalie’s belief that the chosen embellishment can represent strength. However, Holliday actually branded the dixie chick with Bassnectar‘s “Bassdrop” motif. The game changer? Bassnectar’s die-hard bassheads adopted Natalie. 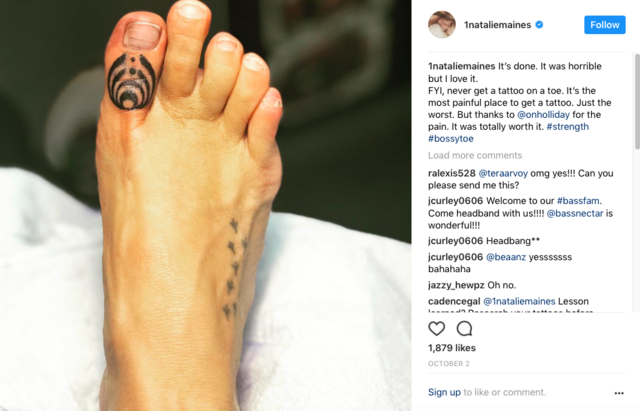 Four years ago, Bassnectar’s Lorin Ashton deciphered the abstract shape. “The logo is about letting go of human dogma (RELIGION!) and surrendering to a much larger universe, but also embracing every minuscule second and tiny experience as PRECIOUS” said Ashton. “It’s a permanent, perfect SIMULTANEOUS dichotomy of total insignificance and total significance merged as one into every single flashing second. And the logo means a lot of other things too, and you can say it means whatever you want to you as far as I’m concerned ?.”

Maybe the Dixie Chicks and Bassnectar are more alike than we think; In 2014, the blog ‘Sensible Reason: A Millennial Culture website for your life’ April fooled followers claiming Bassnectar’s debut country album was on the horizon.