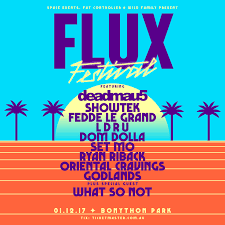 Flux Festival looked to be a pretty great time. Originally the festival planned to use Bonython Park as the site for its inaugural event. Held in the South Australian capital of Adelaide, Flux advertised two big name headliners. And Deadmau5 does not disappoint. Neither do Australian natives What So Not. The festival even announced a second round of ticket sales on November 14th. But in less than a week word went out: Flux Festival was cancelled.

What Happened To Flux?

In many ways the Australian festival seemed like a home run. With two big name headliners and support by other big names like Fedde Le Grand and Showtek, nobody would argue against success. Unless you pay attention to the festival circuit. Bad planning proved the ultimate downfall of Flux Festival.

Flux planned to hold its event on December 1st. Unfortunately for the relatively unknown festival, competition proved to be too fierce an opponent. Sensation and Creamfields, two of the biggest names in global event production, are scheduled for November 25th and 26th respectively. Held in Sydney and Melbourne, these two festivals hold much more mainstream attraction than a brand new festival. Even if it does have Deadmau5 headlining. After the announcement that the festival cancelled all social media and websites were scrubbed. The only remnant of Flux festival is the message in the image above.

The organizers of Flux Festival obviously have access to the capital needed to produced a festival. An artist like Deadmau5 costs at least half a million US dollars. So the big question is what happens with the producers of Flux Festival now. Will they try to resurrect a fallen soldier or will it pass like so many other fallen festivals?