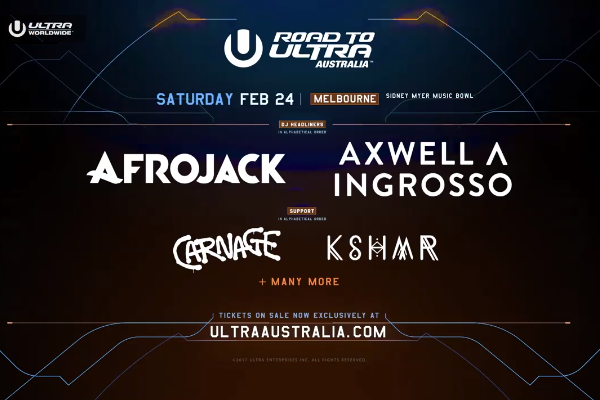 Ultra Music Festival has revealed the debut lineup for Road to Ultra Australia. The Road to Ultra events are generally one-day, single-stage events, designed to bring the festival to far flung places in the world. The first Ultra event held in Oz, it features some local talent in Mashd N Kutcher, Tigerlily, Timmy Trumpet and Will Sparks, and will be headlined by Ultra veterans Afrojack and Axwell Λ Ingrosso. Other major performances will be from the currently controversial Carnage, and California-based DJ KSHMR.

The show will be held on Feburary 24th, 2018 at the Sidney Myer Music Bowl in Melbourne. It should help alleviate the loss of Stereosonic, which was previously held in five cities across Australia. Road to Ultra is expected to repeat at Sydney sometime in 2019.

Tickets for this highly anticipated edition of Ultra are available exclusively here. See the lineup reveal video below!

Since it began, the Road to Ultra events have occasionally led to full-blown Ultra Music Festivals in their host countries. Ultra Japan, Ultra Korea, and Ultra Chile have all evolved, and the success of RTU: Australia could indicate the UMF organizers setting up permanent camp there. Australia has proven to be a hotspot for EDM talent, with major producers like Flume, Alison Wonderland, tyDi, and Tommy Trash. We might expect to see these names show up at the RTU event in Sydney, or future UMF events.