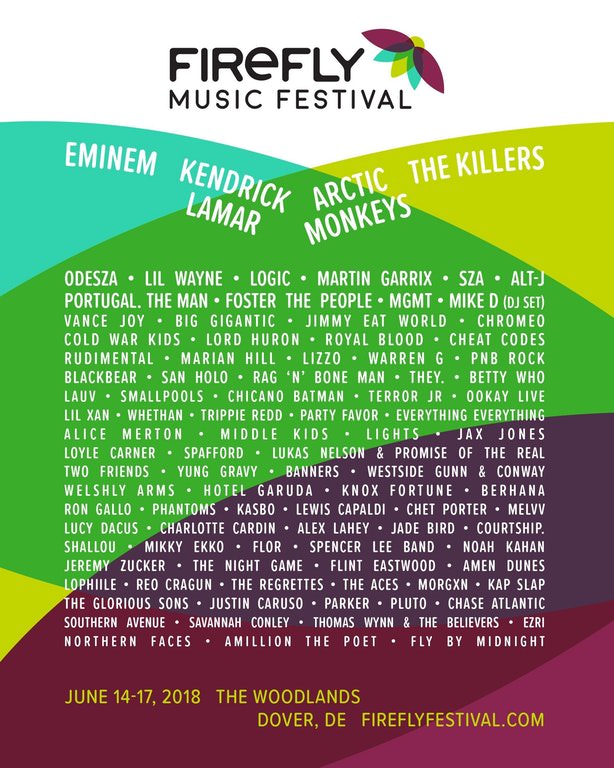 Firefly Music Festival began in 2012 at the Dover International Speedway in Dover, Delaware. The four-day camping festival hosts an impressive lineup of rock, rap, EDM and everything in between. With seven stages of music and close to 100 artists, Firefly is a staple in the East Coast festival scene. And it is a festival that delivers to a wide variety of music fans. Red Hot Chili Peppers and Tom Petty appeared the same year as Calvin Harris and Big Gigantic. Where else could you see Chance the Rapper and Bob Dylan before grabbing dinner and heading to Illenium and Slushii? Well, now fans of Firefly can get excited about the incredibly diverse 2018 lineup!

This years headliners are Kendrick Lamar, Arctic Monkeys, The Killers, and of course Eminem. While the first three are all returning performers, 2018 will be Eminem’s first appearance. Marshall Mathers is fresh out of the studio with a new album, Revival, and he is headlining some of the biggest festivals of 2018.

But while none of the headliners are EDM, there are still a few popular electronic acts. Odesza and Martin Garrix are perhaps the biggest names. Cheat Codes, Big Gigantic, and San Holo will also have sets and Ookay will be doing a live performance.

Have you ever been to Firefly? What do you think about this year’s electronic acts? Should the festival bring in a big name EDM headliner to try and draw a larger crowd? Or should they keep a larger focus on rock and rap artists?