As many artists gear up to begin the 2018 touring cycle, What So Not is joining the party, announcing a massive world tour spanning through most of the first quarter of the year. The Australian producer, born Chris Emerson, has just announced his “Beautiful Things World Tour,” making stops in five continents.

Beginning in just a few days, the Beautiful Things Tour will start with several stops in Asia, before heading to Europe, his home Australia, followed by dates in South America to play Lollapalooza’s South American series in Argentina, Chile & Brazil. Finally, he will head to North America at the end of March for Ultra Music Festival Miami, and will be playing shows throughout most of April, concluding in New York City.. All of the tour’s American dates will feature What So Not’s rare but famed custom-built horse production that he debuted last year closing out Coachella, and only used again at California’s HARD Summer Festival and Australia’s Listen Out. The stage, which What So Not designed himself, features a 9-foot-tall chrome horse pulling a chariot in front of LED walls, a stage design that he believes acts as a physical representation of how his music sounds.

Considering the name of the tour is ‘Beautiful Things,’ we should also expect some new music from What So Not imminently, likely in the form of an EP or single of the same name. While we await any news on upcoming new music, you can check out What So Not’s latest single “Be OK Again” featuring Daniel Johns below, as well as the full slate of tour dates. You can click the link above for ticket information. 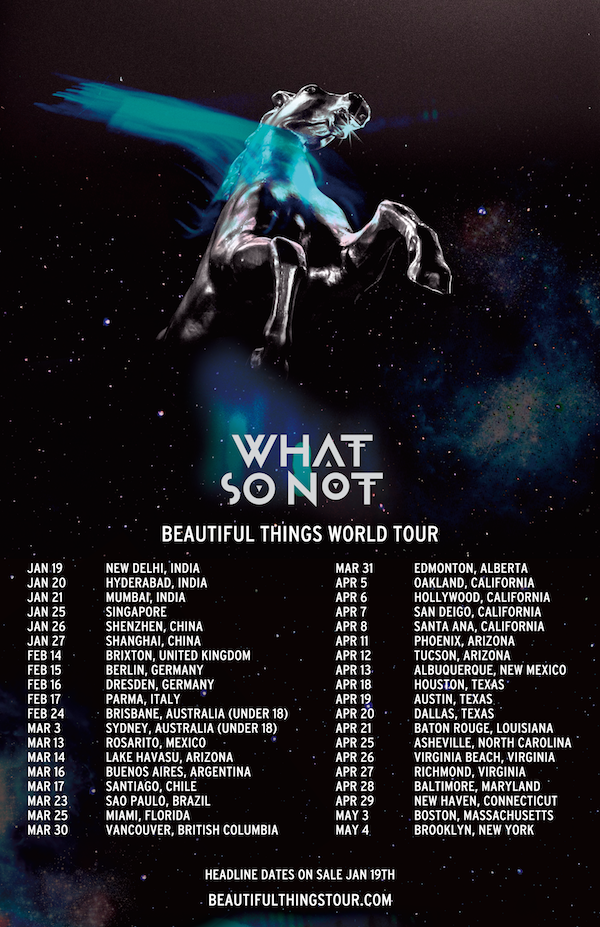