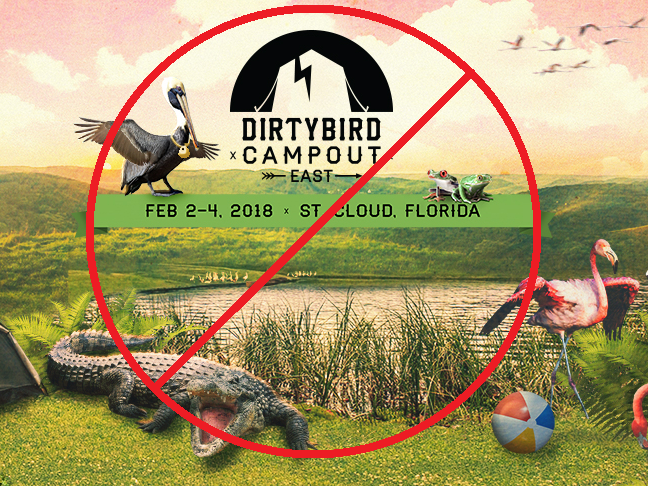 In a Facebook post and tweet late this afternoon (Feb 2/18), Dirtybird Campout announced they are closing the gates until further notice as a result of noise complaints. The announcements claim that local officials have issued the orders to not let anyone else in, and the organizers say:

“If you are not at the site already, we recommend not traveling to the event until further notice”

Just three hours ago they were posting about the Box Office not holding tickets for event-goers with tips to make sure split parties can gain entry. The enforcement seems to have come as a complete blindside. It is unclear if ticketholders will continue to be refused entry, and if refunds will be available.

Irate attendees are tweeting the organizers:

What’s the reason? We’ve been waiting for 30 minutes and we paid for an RV security isn’t helping

Some claiming the event has gone “full fyrefest”, many asking for refunds, and plenty of distraught people who took planes, trains and automobiles to travel from far and wide to get there

Thanks but we’ve already flown in! This is crazy.

Same. From Michigan though. Waiting at the gate. Stranded wth no place to go.

See the announcement below: