With just three months until EDC Las Vegas, and the debut of camping at the festival, Insomniac has announced that the party will start a little earlier this year with a Thursday night camping kick-off party! So far, confirmed artists are Excision, G Jones, and Habstrakt, with more to be announced.

The confirmation came from Insomniac founder, Pasquale Rotella in a Twitter conversation with Excision. Rotella tagged Excision “asking” about the possibility of him performing at the camping pre-party. X responded accepting the offer, and jokingly requests for 20 extra subs in order to perform. Bassheads, your dreams have finally become a reality.

Later, Pasquale Rotella made G Jones and Habstrakt the same offer. Obviously, the two DJs couldn’t refuse. A few hours later? Boom! Your kick off to EDCLV pre-party is official, flyer and all. Join them May 17 from 10pm-3am to greet the morning with bass.

This year’s EDC Las Vegas is looking like it will be the best year yet. Camp EDC is not the typical festival camping experience like other Insomniac camping events. Campsites at Camp EDC feature air-conditioned ShiftPods or RV spots to park. Roll up in your decked out ride, park for the weekend, and relax. There is no need to stress about traffic in and out. This will definitely be an unforgettable experience of a lifetime. These new additions aren’t the only new plans in store for the EDC camping experience; more surprises are soon to be announced regarding a pool and other amenities.

Questioning camping this EDC Las Vegas? Question no further, it’s going to be the place to be, we assure you. Let the bass take you away, beginning with the pre-party’s mini bass lineup. Consider this shindig a pre-cursor to the epic lineup that Pasquale promises to deliver soon. Stay tuned for more announcements to come. 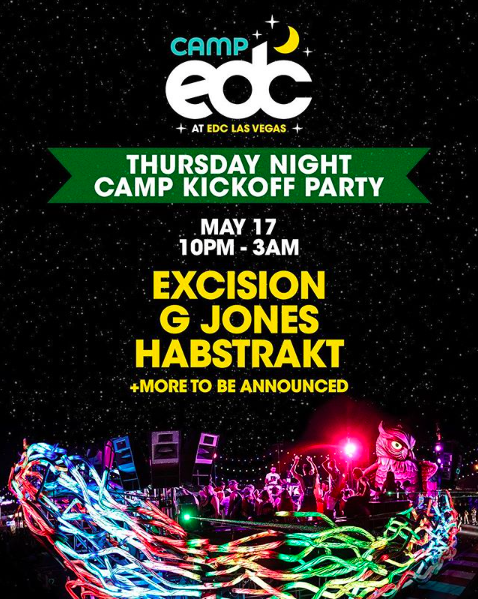