Prior to sitting down and chatting with the man behind the Opiuo project at Okeechobee Music & Arts Festival, there was one constant about Oscar Davey-Wraight that frequently appeared in our research: his approach and attitude towards music is simply different.

Hailing from New Zealand and based in Melbourne, Australia, Davey-Wraight began focusing on his music career full-time in 2010, and since then he has built the basis of his brand and sound on feeling, rather than taking a planned out, methodical approach. When listening to his music, it is clear that Davey-Wraight has never conformed to a particular genre. He self describes his sound as “funkadelic bass music,” but you truly cannot put his body of work into one box. Davey-Wraight released the first Opiuo EP Physical Symptoms in 2009, followed by his first full-length album Slurp & Giggle in 2010. He quickly amassed a solid and loyal fan base in Australia and New Zealand, as well as beginning to grow his brand internationally through the Internet, allowing him to take his act to North America in 2010.

Since leaving his job at a landscape architecture firm and taking on music full-time, Opiuo has consistently released quality music year after year, including 2012’s Butternut Slap EP series, 2014’s LP Meraki, and his acclaimed 2016 album Omniversal. EDMTunes was lucky enough to catch up with Opiuo the day before he released his latest project SYZYGY 01. He gave us a glimpse into his world, chatting enthusiastically about his latest body of work, the artistic freedom that went into the creation of the EP and the tracks that will follow later in the series. We also touched on his upcoming tour including his first solo performance headlining Red Rocks Ampitheatre, and how he is able to live his life to the fullest. Without further ado, here are highlights from our conversation with Oscar Davey-Wraight, the brains behind Opiuo.

We’re fortunate for the timing of this conversation, because your new EP, Syzygy 01 comes out tomorrow. Being that one of your goals for the Opiuo project is sound evolution, what was your sonic goal for this particular project?

For this release, for the first time ever I really wanted to have the freedom to write whatever music I wanted to at the time. I did it over about a 12-month period after I released my last album. Normally it’s like you finish one project and its straight into the next and you’re trying to put it out and everything. So I wanted to take some time to work on the tunes, finish them basically, and then wait six months before doing anything with them because I wanted to package them right. But it just became whatever I wanted to write that day, and also trying to branch out and go and record horns in New Orleans, and have the time to go and work on stuff like that, which has always been a dream of mine. So I did that for some of the songs, and the whole lot will most likely be a series this year, but the cool thing is there is freedom for me as far as when that next one comes out and I can just work on them. They’re basically done, but I can keep working on them as I go, and see what works this time, what I feel good about. It’s kind of like an open project, it could be SYZYGY part 25 by the time I’m finished. That was a big thing for me. I don’t want to be restricted to 12 tracks that have to make sense to each other, because an album is like giving birth, you know. It takes a part of your soul with it.

You started your career as a solo producer, and then you expanded further into the live sphere, eventually leading to the formation of the Opiuo Band. How has the incorporation of live instruments grown for you over the course of your career?

To be honest, the way I structured the band, was equal parts wanting to play music live, wanting to have people on the road with me, and wanting to hangout with cool people and be inspired by them. It’s kind of like getting new friends, or old friends coming with you and doing cool things. So half of it is the music, and half of it is the enjoyment of being around cool people you want to hang out with. Musically I think it’s allowed me to meet people along the way that are amazing and I can record with them and change my music into being even deeper of a rabbit hole to listen to so it’s not always so obvious. And I really like that about music, sometimes the simple stuff is great, and sometimes the really complex stuff is great. If it’s done well, you don’t even really know what it is.

Tonight you’ll be playing a solo live set, versus the Opiuo Live Band set. How do you approach the solo live set differently than a full band set?

I could’ve written a song yesterday and I can play it tonight. With the band it’s a lot of rehearsing, and a much more preplanned thing. There are sections where you can jam and do whatever you want, but the idea of the set is already programmed, you’ve already rehearsed it. But tonight, in an hour I can change something up and put some new things in, and I really appreciate that because there’s also songs in there that I can’t play in the band because they don’t really fit the live format. The solo set is a faster paced, more electronic adventure.

(With the live band) I just wanted to be able to show my music in a different light and have fun like I was saying. It’s all about…I mean what is this ride anyway? We’re all just hurtling through space, you just give things a go and figure out what works and what makes you feel good. I thought it was something I wanted to try, and I gave it a go. It’s like getting a new job or something, It was great, I was like oh my god this is cool. It evolves the way you think about music too, which is really cool.

You’re going on tour in about a month and a half to support the new EP, what can your fans expect from this upcoming run of shows?

For me, that’s going to be another adventure of going as far into a solo live show as I can. I’m going to expand it again so I’ve got a lot more to do, and I can take everything I’ve done, and add all the new things I’m currently doing at that very moment to a new live reality. Because to me, I love doing all the things I do to the absolute maximum at that moment, and as soon as I hit a point where I feel like I’ve kind of done this thing, I want to do it in a different way. All of the original things will still continue to exist, but I think this is a moment where I’m getting really excited about taking lots of synths on the road, lots of drum machines, lots of things to really make every night completely different.

It must be pretty cool to be able to experience your own successes alongside your fans, those who have such a strong appreciation and support for your work, even those that don’t know you personally, yet still feel some sense of accomplishment when you achieve success as an artist.

Yeah totally, but they do kind of know me in some way, through music. You write the music, it’s yours, and then as soon as you release it, it becomes theirs too. And the way people interpret it impacts me, and that’s what syzygy means; it’s the relationship between planets, kind of the push and pull of things. And I feel like that with music, it impacts everyone around it just as much as it impacts me.

So essentially syzygy represents one of those moments where someone might tell you that your music changed their life, and in doing so, without even knowing it, they may have just changed your life at the same time.

Absolutely, and it does (change my life). I used to not let myself be able to grasp that whole thing. You know, because so many people tell me things along the way. But every time, more and more as I go along, more and more it really hits me. People tell me a story, and I’m like fuck, you know. I used to listen to music that would do this to me when I was younger, and to have that impact on people, I don’t think I’ll ever get used to that.

Anything you want to add?

No, just have a good time. Shut the fuck up and dance. Be here now, it’s important. 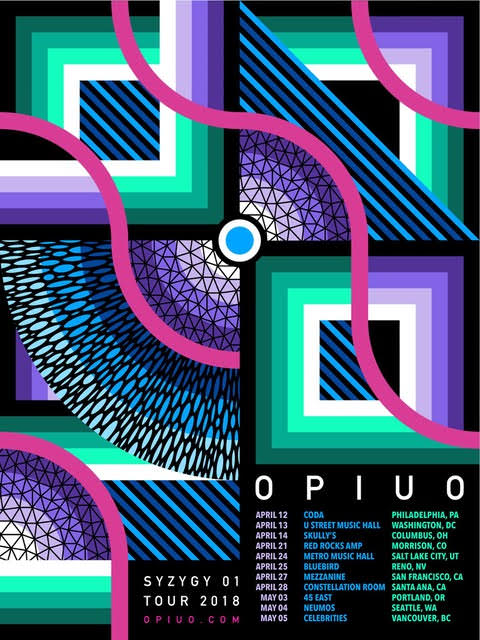