Ultra Music Festival said to expect the unexpected. And let’s be real, at this point no one knows what to expect. There has been so much information to support and refute so many different theories. Maybe the surprise is a Tiësto trance set. Maybe it’s Daft Punk. And maybe it’s everyone’s favorite Swedish trio, Swedish House Mafia.

Not that long ago Steve Angello ignited the rumors when he started following Axwell & Ingrosso on social media. A bit after, Swedish House Mafia updated their Facebook profile picture and banner. And while SHM speculation has recently fallen in favor of Daft Punk, some new information has popped up to fuel that fire.

Axwell’s lighting artist, Charly Bendenoun, posted a photo to Facebook with a caption that reads “They are back next weekend at Ultra Miami (except the fourth one on the left), you will have two tomorrow at the Pharaonic Festival Chambery”. Since then he has deleted the post. Who knows if this means the trio will actually reunite this weekend. 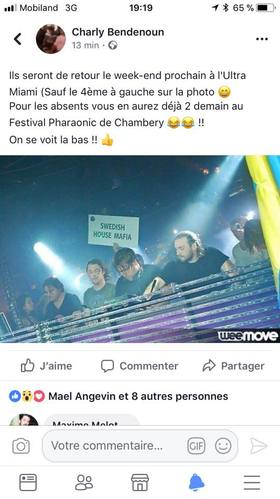