Gone too soon, but police are now saying that there was no foul play detected in the devastating death of Avicii last week. As we continue to mourn his loss, a photo from TMZ has surfaced of him with a drink in hand. Just one day before his death, he was vacationing on a yacht with some friends in Oman. The ominous picture surfaced at the same time police told Sky there is ‘no criminal suspicion’ surrounding the musician’s death.

In the past, Avicii struggled with alcohol addiction and suffered from acute pancreatitis due in part to excessive drinking. He combated his anxiety via drinking. As a result of his health problems, he had his gallbladder and appendix removed in 2014. It is with this knowledge in mind that we are uncertain what the clear beverage is that Bergling had in hand. During the trip, sources said he definitely seemed to be in good spirits while enjoying his time.

Police say the body of the Grammy-nominated electronic dance DJ will be flown from Muscat, Oman to his native Sweden this week. How will we ever find peace of mind over what happened this past weekend? Thousands have taken to social media to honor him, and it is clear that his death has had a massive impact on fans and artists alike.

Fans flooded to Sergels Torg to pay tribute to the DJ this weekend, listening to his music and celebrating his memory together. Vladi Mart captured a great moment of the event, pictured below. 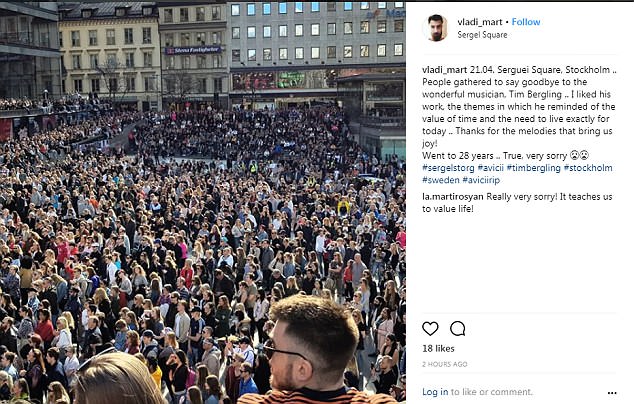 Swedish reports say Tim had checked out of Muscat Hills sometime last week and his brother, David Bergling, will be investigating just what happened in the days leading up to his death.

Avicii’s final heartbreaking tweet, which reads ‘Thanks for the nomination! @billboard #BBMAS’, has gained new poignancy in the wake of his death. No more details about his death have been provided. Oman police and state media had no immediate report either after discovering the artist’s death that Friday night.