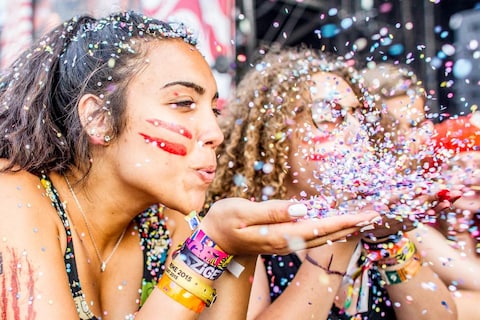 Glitter seems like a harmless bit of fun, but its environmental impact has caused some scientists to believe it should be banned.

The Drastic on Plastic initiative, led by the Association of Independent Festivals (AIF), will lead to the removal of plastic drinks bottles, plastic straws, plastic food trays, cable ties and toiletry bottles from festival sites.

It will also outlaw that festival favourite: glitter.

Glitter is made up of tiny pieces of plastic. As of 2021, it will be forbidden at 61 independent music festivals. Some include End of the Road, Bestival, Boardmasters and Kendal Calling. To see a full list, click here.

The association confirmed this week that all of its members have signed a pledge to ban glitter from their events.

Thankfully, for all you glitter junkies, a ‘BioGlitter‘ alternative is being pushed, made from wood fibres. Festivals including Shambala that have prohibited traditional glitter this year have encouraged their attendees to stock this eco-friendly alternative.

This #EarthDay we’re getting #drasticonplastic! Plastic straws & disposable plastic bottles have been banned at Shambala since 2013 – but we need to talk #glitter, menstrual products & reduce the plastic you lovely lot bring to site: https://t.co/Tu12PIubzA pic.twitter.com/yRhZy46YI8

Ticket holders will not be stopped from bringing glitter into the event. They are, however, strongly encouraged to use BioGlitter or other alternatives.

“We are committed to minimising the impact of glitter on the environment and Bioglitter is our first step on that journey. We are convinced that it will revolutionise the market and demonstrate that there is an alternative way forward. It represents a large step forward towards our goal, containing around 92% less plastic than any counterpart and naturally degradable, so significantly reducing its effect on nature.”

Quite frankly, there are such excellent eco-alternatives out there. There doesn’t seem to be a lot of good reasons to use plastic glitter.