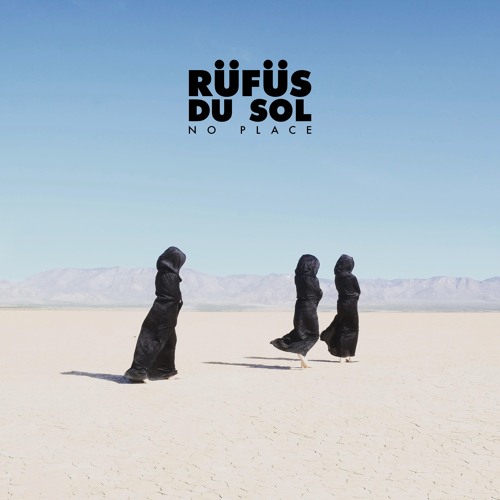 RÜFÜS (also known as RÜFÜS DU SOL) is an alternative dance group from Sydney, Australia, that consists of members Tyrone Lindqvist, Jon George and James Hunt. Their debut album “Atlas” peaked at number 1 in Australia, while their second album “Bloom” debuted atop the Australian albums chart in early 2016. Last year they made history at the first ever Electronic Music Awards, where the multi-talented musicians won the award for “Live Act of the Year,” a particularly impressive feat since legendary acts such as Bonobo, Bob Moses, Eric Prydz, Porter Robinson and Madeon were also nominated in the category.

This week the super group finally graced us with new music after a two-year long hiatus of silence. Their first single of 2018 is titled ‘No Place’  and was well worth the dreaded wait. The song is centered around the lead singer Tyrone Lindqvist’s haunting vocals with an equally powerful and moving instrumental to wrap around it like a silk blanket. The echoing vocals, powerful strings and triumphant horns amplify the effective power of “No Place” on listeners, the end result is a simply beautiful piece of cinematic music. Overall the song has a similar vibe to the songs masterfully presented on Bloom, something die hard fans will truly appreciate.

We also have some more good news. “No Place” won’t be the last piece of music from RÜFÜS DU SOL this year, this track leads up to the group’s third studio album slated for a 2018 release via Reprise Records (Warner Music). We’re excited to say the least!