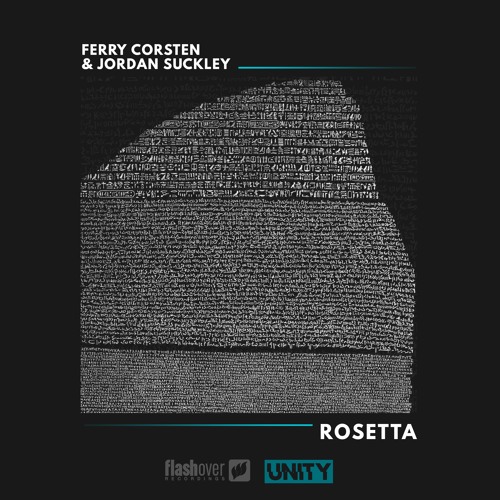 Ferry Corsten is releasing his latest team up ‘Rosetta‘ with Damaged label-boss Jordan Suckley. ‘Rosetta’ is the third release on Corsten’s UNITY project. The track will be released on July 13th on Flashover Recordings. The full track premieres on Corsten’s Countdown 574 this week. The previous two releases paired Corsten with Paul Oakenfold for ‘A Slice of Heaven,’ and with Dim3nsion for ‘Safe With Me.’ Corsten teased his next UNITY collab with the soulful Gabriel & Dresden on social media this week.

‘Rosetta’ is a powerful tune that combines the euphoric sound of Corsten with the magical vibes of Suckley’s 3FECT concept. The result is an uplifting tune that will strike a cord with trance fans of all kinds. While only the teaser has been posted, the song promises to be massive.

The goal of Corsten’s UNITY project is to unify the trance world. He feels that there is a wide gulf in trance fans these days – some only prefer psy trance, some only vocal trance, others only classics. Everyone seems to be lifting their noses at one another, therefore Corsten decided to take a stand. He hopes to collaborate with artists in all genres, with the goal of “unifying” us all.

“It’s Unity, united, we’re all one genre, whether it’s this tempo or that tempo, we are a group that makes a stand in the electronic space.”

Ferry has promised future collaborations with ALPHA 9, Markus Schulz, and many others. Checkout the teaser for ‘Rosetta’ below, and prepare for much more from the Dutch maestro.