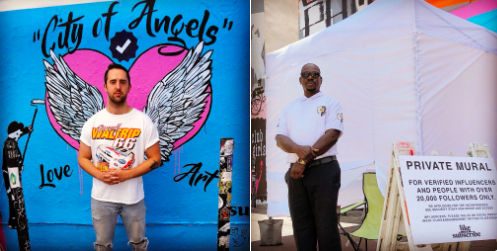 This week a viral tweet featuring an “influencer only” mural in Los Angeles popped up on our timelines. The tweet in question displayed a picturesque mural guarded by a private security guard that barred anyone without verified status or at least 20,000 followers from posing in front of the “private mural.” The internet, of course, went up in arms over the seemingly discriminating mural, with some users decrying that “we are literally living in hell.” Well, we’ve recently learned that the whole thing was a marketing ploy for a new digital series aptly titled “Like and Subscribe.” A publicity stunt in LA? Who would’ve thought?

There’s a new security-guarded mural in LA that only allows influencers and verifieds to take pics in front of it. pic.twitter.com/PDlLJ9C0DI

A shocking twist to the whole fiasco is that Dillon Francis has a starring role in the series. The DJ/producer—who also serves as executive producer of the show—will play a talent manager who gets in over his head taking on an out-of-control-group of viral stars.

“Like and Subscribe” will also star SNL’s John Milhiser and comedian Brandon Wardell. The show is slated to premiere on July 9th.

Over the last year Ive been developing my own show called @likeandsub. Its about a topic very very dear to my heart…influencers. Its out July 9th…I am starring in it & also I executive produced it.. A lot of work went into this & i am so excited for you all to finally see it. pic.twitter.com/Y1DtzD6Ril