Earlier this year Insomniac & Zedd teased an event at the Los Angeles State Historic Park, this was later revealed to be last nights Zedd in the park. It is no secret that Insomniac Events throw some of the best events around, and their recent venture with ‘Zedd in the Park’ was exactly that. Together with Zedd, the team over at Insomniac events saw 15,000 strong come together for the first ‘Zedd In The Park‘. The event took place at the Los Angeles State Historic Park. This was actually the first dance event to take place since the park closed for remodeling in 2013. EDMTunes was able to attend the sold out event, which easily exceeded our expectations as we got to witness Zedd & Company utterly destroy the grassy dance-floor.

The box office opened at 4. It was at that point the crowd begin spilling into the open pastures of the historic park. The shows didn’t start until 5, but the early crowds had plenty of activities to keep busy with. There was something for everyone, as ‘Zedd in The Park’ featured a Water Balloon contest, Croquet, and some good ole’ fashioned Corn Hole. For those looking for food, there was a wide variety of selections to choose from. There was everything from Burgers, to Pizza, Hotdogs, and even Ice cream. The lucky ones among us managed to snag an order of ‘Zedd’s Tacos’ which i’d imagine were concocted by the man himself. 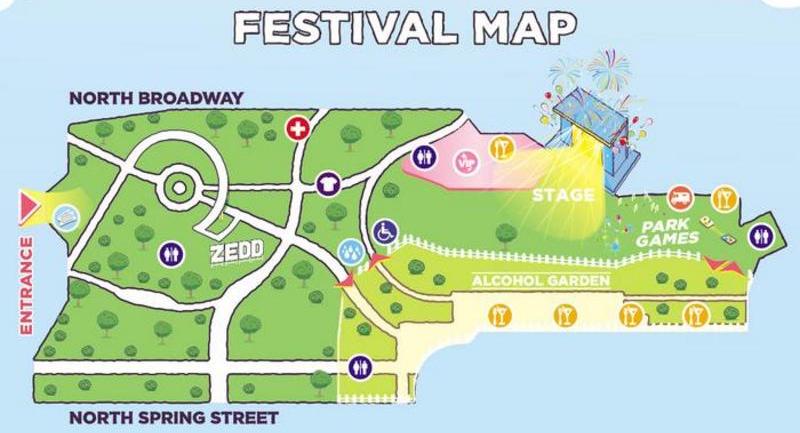 As you can see from the Festival Map, there was only one entrance, and one exit. This was troublesome at times as traffic seemed to bottleneck during the events busiest moments. Luckily for us there were plenty of mini Zedd murals & exhibits, giving us the perfect opportunity to take some photos as we waited to move along. The various different amenities were sprinkled throughout the grounds, giving us more than enough room to walk about, and not feel cramped.  With how much space you had to walk around, you wouldn’t of even guessed there were 15,000+ people at the venue.

The shows began at 5 ‘o clock sharp. We were then gifted with performances by Whethan, Medasin, Oliver Tree, and the Brownies & Lemonade All-stars. As each artist brought their own unique styles to the park, it was easy to see why they were each added to the lineup. The happy-go-lucky, feel good vibes were in full effect, and definitely made the whole show one cohesive act. While each of the acts managed to bring their own personal flavor and move the show along smoothly, it was evident that the crowds wanted Zedd.

Zedd started his performance at 9 PM, and the crowds couldn’t of been happier. He opened up the show with his track ‘Beautiful Now‘, and and the crowd went wild as they sung along with Jon Bellion. It was magical to see the crowd sing, dance, and cheer as Zedd laid the heat. Zedd played what seemed like his entire discography during the magical Two Hour set. Zedd dropped his set mainstays such originals ‘Stay The Night‘, ‘I Want You To Know‘, And ‘Spectrum’. We were also lucky enough to hear many of his iconic remixes such as his ‘Let Me Love You‘, ‘Rude‘, and ‘Alive‘ edits.

What were perhaps the biggest parts of the night were the moments in his set where Zedd brought out his special guests. Another aspect that made this quite the remarkable night, was Zedd’s track selection, as you could see he was he clearly having a blast, and playing what he wanted. It should also be noted that he played some amazing 80’s music, which immediately had the crowd breaking into song & dance. Zedd dropped Whitney Houston‘s iconic ‘I Wanna Dance With Somebody‘, and also played Queen’s ‘Bohemian Rhapsody‘. It was at this point that he transitioned to ‘Closer’ by The Chainsmokers, and even brought out Drew Taggart of duo to sing out the vocals. There was one point in his set where Zedd brought out Ookay. They then proceeded to played his smash hit ‘Thief‘, and the crowd lost it, myself included.

The show wouldn’t be complete without a bit of new music, and that’s exactly what happened when Zedd brought out Elley Duhé. He brought out Duhé and they premiered their new track ‘Are You Happy Now‘. Throughout the course of the night Zedd played out everything we wanted to hear and more. Strategically timing his mixing, it was nice to see his more recents hits such as ‘Stay‘ played towards the end. Zedd managed to work up the crowd and build up the tension very well. This was shown when he finally played out the chart topping song ‘The Middle‘. It was at this point, the dance-floor went absolutely nuts. This was the type of crazy I have only witnessed at some of Dance Music’s of the biggest music festivals.

Having seen Zedd numerous times before in various different settings, it was evident this was going to be different. The event definitely left me with a positive experience as the overall vibes felt were very homely, and chill. Zedd In The Park had me feeling as though I was at a family picnic of sorts.

Then there were moments where I felt improvements could be made, such as with the fleeting audio. There were times the music was easily overpowered by the groups of nearby Zedd fans. For example, when as if in unison, they screamed out the lyrics to ‘Clarity’ word for word. There were also moments where you would notice the transitions between tracks. They weren’t always so seamless, but it seemed to add to the air of authenticity. We could see for ourselves that this was Zedd himself pouring his heart and soul into his set. It was evident he was not just playing a prerecorded mix.

Zedd In The Park did a phenomenal job of showcasing the potential of what the Los Angeles venue has offer. Insomniac and Zedd both did a stellar job in featuring up and coming artist. It goes without saying that Zedd In The Park has definitely left me wanting more. It is not often that such a marquee name puts on a show of this magnitude alone.