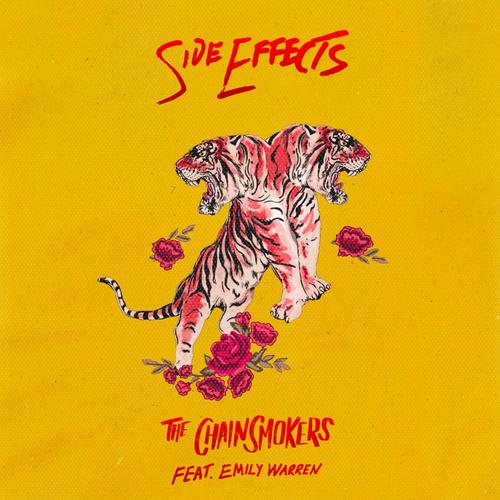 The Chainsmokers – Side Effects

The Chainsmokers are back, and they’re bringing the heat with their newest release titled ‘Side Effects‘. The track sounds undeniably different from their previous releases, such as ‘Sick Boy‘, ‘You Owe Me‘, and ‘Everybody Hates Me’. Their previous tracks feature what can be called a broody, introspective vibe, while ‘Side Effects’ can easily be categorized as a poppy, summer jam. The track features frequent TCS collaborator Emily Warren on the vocals. Just like ‘My Type’, ‘Don’t Say‘, and ‘Paris’ before it, it’s great.

‘Side Effects’ starts off with a reversed vocal effect, which is followed by a faint drum kick. Almost immediately, a fat, funky bass drops on us, which is then proceeded by the vocals courtesy of Emily Warren. The rest of the percussion comes in, and at 0:30 we get what can be called the drop. With an sing-a-long chorus of:

It’s easy to see that this is potentially the next Chainsmokers radio dominating hit. With a run time of only 2:51, it’s an easy song to play on repeat. The track was released alongside a lyric video, which can be found below. Side Effects is out now, and can also be streamed below.