There are few people with a resume like Tom Morello. We have seen him everywhere from Rage Against The Machine, Audioslave, and even a stint with Bruce Springsteen and the E Street Band. Most recently we have seen him as a part of the supergroup Prophets of Rage. Prophets consist of three members of Rage Against the Machine and Audioslave, two members of Public Enemy, and rapper B-Real of Cypress Hill. Now, we will see Morello explore a new avenue, as he has finally revealed the release date of his long anticipated solo album Atlas Underground.

Many have known about the existence of the album for quite some time, but Morello finally released the first teaser on his Instagram yesterday, revealing many of the collaborators he worked with on the project. The album features a heavy cast of dance artists including Steve Aoki, Bassnectar, Knife Party, Herobust and even Pretty Lights. Overall Atlas Underground features an even more diverse crew, as it will feature names such as Killer Mike, Portugal. The Man, and Vic Mensa.

THIS IS A COMMUNIQUE FROM THE ATLAS UNDERGROUND.

Always one to fight for what he believes in, Morello states that:

“… By challenging the boundaries of what music is and has sounded like before, you can open peoples’ eyes to changing the status quo in society.”

This comes amidst what he calls a “…heightened sense of impending doom…” in relation to the current state of affairs that our country finds itself in.

Along with the album announcement, Morello has released two tracks off the album. One is ‘We Don’t Need You‘ with Vic Mensa, and the second is the previously released single ‘Battle Sirens‘ with Knife Party. Both of these tracks, along with the full track listing can be found below.

The Atlas Underground will be out October 12 via Mom + Pop. 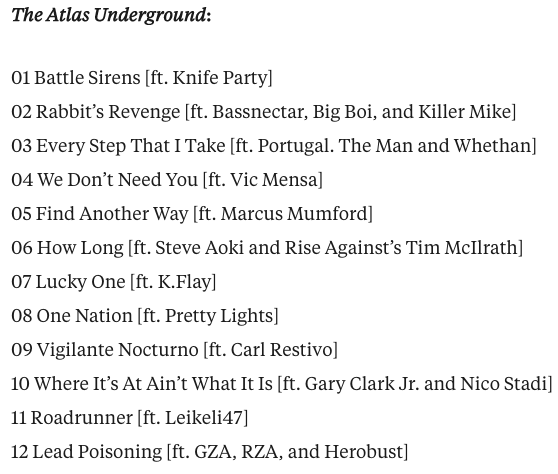