Parisian DJ and producer, Zimmer, has put out some of the most interesting tracks in recent times. Defining his own style of music, Zimmer has incorporated his personal life to producing a new track called ‘Landing‘. The dark and luminous track presents a slow but progressing sound which later transitions to a soothing mellow beat that leaves you drifting to the music.

Zimmer made a name for himself by using his unique signature sounds to remix songs by artists including MØ, Wunder Wunder, Brooke Fraser, and many more. He has brought his melodious music to venues around the world but kick off his debut North American tour this fall. Zimmer will make stops in major cities including New York City, Los Angeles, Chicago, Montreal and San Diego. You can check out the full tour dates below to see if you can catch him at a venue near you. The Parisian DJ is expected to release a brand new album in the near future but for now, take a listen to his new track, ‘Landing’ below. 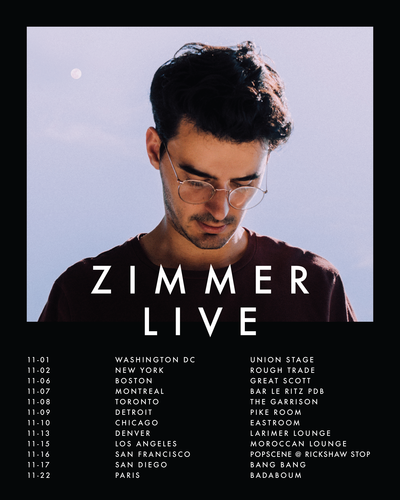