Lowtemp Music signee and Gramatik protégé Will Magid, otherwise known as Balkan Bump, has seen his career take off since he was discovered by the Slovenian electro-funk producer in mid-2017. Immediately seeing something special in his new signee, Gramatik released their collaboration ‘Aymo‘ last October, and took Balkan Bump with him on his Re:Coil tour along with Haywyre. Balkan Bump took advantage of being able to spend so much time with such talented musicians, and one of the results of that experience is his new single “Give Me Something to Funk” featuring Kelly Finnigan.

Released today, Magid had this to say about the new tune: “This song is a direct result of touring with Gramatik and Haywyre. As a matter of fact, I recorded most of it on our tour bus…Sometimes I would walk towards the bus with a strut, grooving in my mind to make-believe future songs. One night the groove in my soul was so infectious I had to record it.”

In addition to the fantastic vocals laid down by Kelly Finnigan, Gramatik’s touring guitarist Adam Stehr also contributed to the creation of the track. The groove on “Give Me Something to Funk” is undeniable, as it has been on every single Balkan Bump release to date. His shows on the Re:Coil tour impressed both audiences and his musical peers enough to keep the momentum going into this fall, when he will play a full slate of tour dates with Beats Antique, CloZee, and Russ Liquid, as well as one more very special show with Gramatik at Red Rocks Amphitheatre on September 1st.

Take a listen to the groovy “Give Me Something to Funk” below, and check out Balkan Bump’s tour dates to see if he’ll be hitting your city in the coming months! 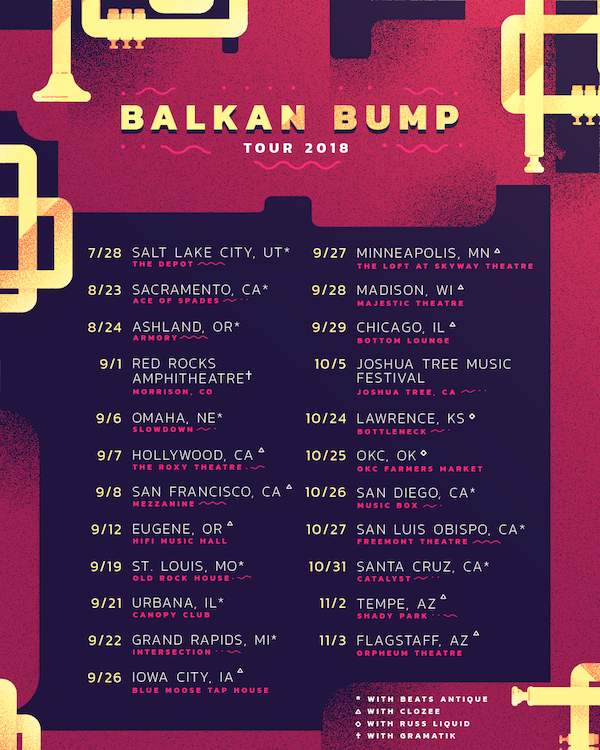