In the dance music community we like to preach tolerance, love, and acceptance. Bassnectar is one artist that makes these statements a major part of his persona, but apparently those concepts don’t apply to the religious or those with differing politics. In Bassnectar‘s case, it seems as though when the controversial subject of religion gets tossed into the mix, he is bound for a doozy of a rant.

In a recent Twitter rant, the usually kumbaya-preaching American producer began to go off on fans who supported religion or differing political views. The forty-year-old musician didn’t hold anything back as he stated:

His army of dedicated followers was quick to chime in and proudly stated: “Jesus doesn’t hate anyone yooooo”.

Jumping back into the argument a day later, the ‘Bass Head‘ artist attempted to justify his harsh statement by explaining his hatred towards Republicans and Christians via presumed interaction with Jesus himself. 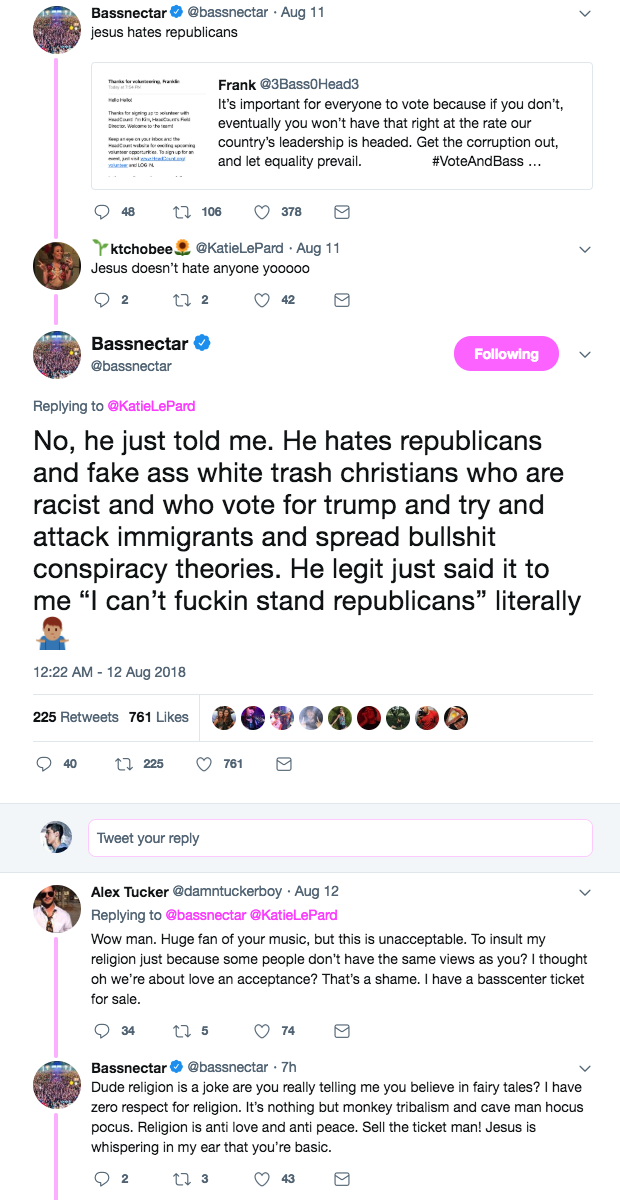 One fan, in particular, was not taking his harsh Tweets lightly. Although he mentioned that he was a “huge fan” of Bassnectar’s music, he does not support this kind of behavior and would be selling his ticket for an upcoming show due to this “unacceptable” attitude.

This is a friendly reminder that everyone is entitled to their own beliefs and is allowed to express their own personal thoughts. It is also important to keep in mind that some subjects, i.e. politics, money, and religion, should be approached carefully, or sometimes, not at all. Be kind to one another and you will be rewarded in the end.