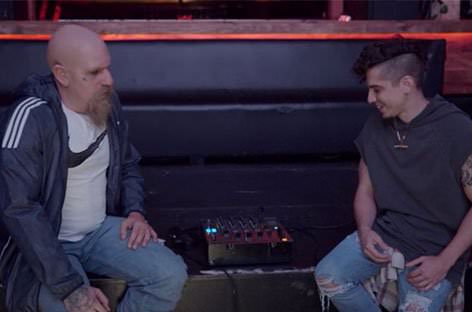 In the latest episode of ‘Who Is America?’ Sacha Baron Cohen who has duped politicians and celebrities alike, is now trolling the electronic dance music genre. Cohen plays Ricky Sherman, a British convict who is getting a second chance after being released from prison on the fifth episode that aired this past Sunday on Showtime. Sherman heads to Miami as DJ Solitary and meets up with Jake Inphamous at the now closed Heart Nightclub.

DJ Solitary procedes to play Inphamous, a club promoter a track that involves a mash-up of sounds from a dinner tray being smashed against someone’s head, toilets being flushed, to people vomiting and someone being stabbed. In which Inphamous responds “I mean if it’s happening might as well capture it.”

The rest of the clip includes the club promoter absolutely loving DJ Solitary’s track calling it a “masterpiece” and even booking him at Sway, a club in Ft. Lauderdale. Dressed in an orange prison jumpsuit, Sherman takes the stage and begins playing his prison made music. Taking it one step further, in true Sacha Baron Cohen fashion, DJ Solitary gets on the mic and asks the club-goers “If you believe we should stop shaming murderers say yeah!” And wouldn’t you know it, an uproar of “yeah’s!!” are heard throughout Sway.

Who created the masterpiece of people throwing up and getting stabbed? Scottish producer Hudson Mohawke took to Twitter to let his fans know he produced the track played by DJ Solitary.

If you caught @SachaBaronCohen edm trolling episode last night I made the track lol pic.twitter.com/9quscQF7ns

This is certainly not the first and definitely won’t be the last of Sacha Baron Cohen pushing the envelope and duping people all over the world.

Catch the full clip below: