The BangOn! NYC promoted Elements Festival NYC began as a small art-centric music festival held in an industrial wasteland setting on the water in Red Hook, Brooklyn. just a few years later, they had established themselves as a local powerhouse, booking massive headlining acts such as Gramatik, Ghastly and Mija in 2016. The following year, they not only expanded the New York edition to two days, but also held the first annual Elements Lakewood in Lakewood, Pennsylvania, hosting a mix of Elements NYC veterans alongside other bona fide dance music all stars. The camping festival was met with rave reviews, and was held once again this year over Memorial Day Weekend. Now, the focus shifts back to New York for the fifth anniversary of Elements NYC.

We are now less than two weeks away from what we expect to be an incredible fifth anniversary for the New York City edition. The festival has been shifted back to a one day event after expanding to two days in 2017, and judging from year’s past, that’s the way it should be. The small size and strong vibes are perfectly suited for one day of exploring the industrial playground in the Bronx. This year, the one and only Bassnectar will do the honors as the headliner on the Earth Stage, while Dirtybird’s Justin Jay of will close out the Fire Stage while the Dirtybird Players warm the fire up throughout the day. As usual, the Water Stage will play host to some of the industry’s finest deep house artists including The Golden Pony, SNBRN and Goldfish, and the Air Stage will be blasting smooth and crisp vibes from start to finish. 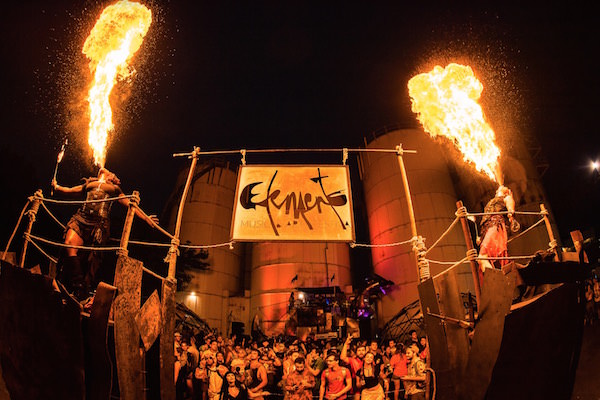 This year, Elements will be launching a new artistic theme called ‘Art of the Future,’ showcasing technology driven art pieces from 14 different artists. Below is a video previewing some of the new art pieces, followed by a description of each new installation per the Elements press release:
“Marpi will present a take on interactive, large-scale projection mapping using Kinect (a line of motion sensing devices), while photographer Jarid Blue will use human bodies as his canvas to project digital imagery. Utilizing mixed media, Justin Wood will combine projections with mirrors and fog, and LED sculptures by Orbism will pulse to attendees heartbeats. Rhizome will showcase stunning projection mapping using CNC design creating incredible textures and depth, meanwhile Seth Hosko & Dan Ragan will treat festival goers to an immersive audio and video sound experience. Other notable installations include a sensor-based infinity mirror that responds to one’s presence by Brendan Burke, a sculpture by Vicki Lam using mixed media technology that combines projections with UV light and water, “Salix Vivifica,” a weeping willow by Dom Romaniello & Rachel Smucker that uses sensor-based misters, and “Whispers in the Grove” a collection of LEDS and sensors that respond to sound by Mirabai Howard-Geoghan, Kathy Creutzburg, and Natalia Lesniak.”

The fifth year of Elements NYC is shaping up to be the best one yet, and we cannot wait to enter the grounds and see all the incredible new surprises. Elements has gotten exponentially better each year of its existence, and we know year five will be something special. If you have not gotten tickets yet, don’t sleep, prices will rise once again this Friday. With so much to offer for such a low price, Elements NYC is a can’t miss experience. You can check out ticket options at the link above, and we hope to see you in the Bronx on August 11th!