Israeli duo Vini Vici have been rocking Tomorrowland for the past three years. With an impressive show at the mainstage on the first week of the festival, there is no doubt that the duo from is the hottest psy trance sensation in the world right now. We had the chance to talk to them right before their set at the ASOT Freedom Stage. Read here what they had to tell us!

11. Good to see you again at Tomorrowland! This year, you are playing both at ASOT and at the Main Stage. How does it feel to be taking over the main stage at such a legendary music festival?

Matan: It was an epic feeling, a natural high. I can easily say, and I’m sure Aviram will agree that it was one of the best moments of our lives!
Aviram: And the buzz was so crazy after that! Normally after a good show, it takes a few hours but with Tomorrowland it takes a few days, and without noticing we are here again, ready to take another buzz that will probably take another week.
Matan: It kinda feels like our birthday, you know! We get like, hundreds of messages and a lot of feedback, people actually writing stuff, like, taking their time to tell us how meaningful it was for them.

22. Are you bringing some surprises for all your fans at Tomorrowland?

M: Yeah, of course! It’s so demanding, when you do the full festival season, so between each festival you need to work hard in the studio and edit, mash-up, produce, it was only one week time so we didn’t even have time to laid back!
A: Plus we had four shows in the middle of the week that we needed to prepare for!
M: But we managed to change a lot of the set.

33. Songs like Tribe and Chakra (with W&W) are deeply influenced by ethnic sounds. Can we expect more of that in your upcoming productions?

A: Definitely! We really like the ethnic sounds, it’s a part of Vini Vici. Our new song with Alok and Armin Van Buuren is not ethnic, but there’s something very spiritual there that, the track is called ‘United’.
M: The meaning is spiritual and the flute is ethnic but without the ethnic vocals. But of course, psy trance and ethnic is like two brothers, is going well together and of course is part of our psy trance root, and I’m sure we’re gonna do more of it.

44. You have recently collaborated with Steve Aoki for the single
“Moshi-Moshi”. Does this mean that more collaborations with EDM giants are coming down the pipe? Can you tell us anything about them?

A: We have a few more collaborations in the future, we didn’t do them yet but we have the offers, we can’t share exactly the names of them.
M: We have endless ideas and endless offers, but as I said, the festival season takes a lot of our studio time, but of course once we will chill out a bit, we will get in the studio and make a few surprise for you and merge psy trance and a lot of different worlds. 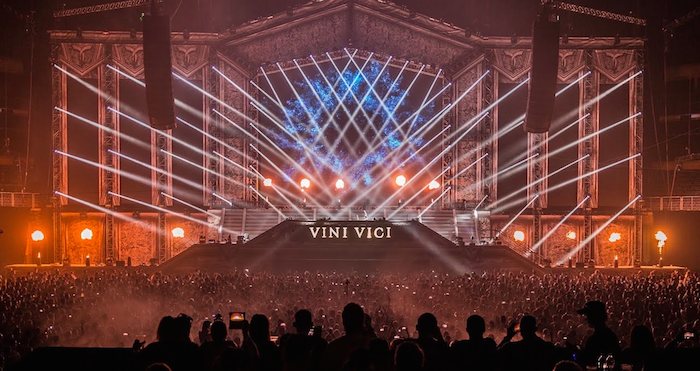 55. You are now positioned as some of the most well known Psy-Trance artists of the last few years, leaving the underground scene behind and attracting more and more attention in the charts everyday. What is the most surprising use of psy trance you have seen so far?

A: First of all last week we saw Psy trance on the main stage here, at Tomorrowland, and it was insanely full, I guess it was like 40,000 people!
M: Its actually was the best psy trance stage in Tomorrowland ever, I got the report from fellow DJs that at 4.30pm were already 3,000 people over there, and the day before, all the rest of the small stages were half empty, so it’s showing you how powerful it became!!

66. Tell us a bit about how Israel has influenced your sound.

M: It’s the most direct connection you can have, because in Israel the psy trance is a sub culture for us, it’s everywhere, from a wedding, to a club, university, schools, literally everywhere, so when a younger guy wants to be a DJ; the first thing he will probably try to do in Israel, is try to produce Psy Trance. It’s kind of the motherland of Psy Trance, at least from the producers’ point of view, so of course it’s a direct influence, it’s on our DNA.

77. One last question: Are you morning people or night owls?

A: I think that today I’m a morning person!
M: I’m totally a night owl!

We’d like to extend a sincere thank you to Matan and Aviram of Vini Vici for taking time out of their hectic Tomorrowland schedule to chat with us. You can check out their intense, high energy set from Tomorrowland below!