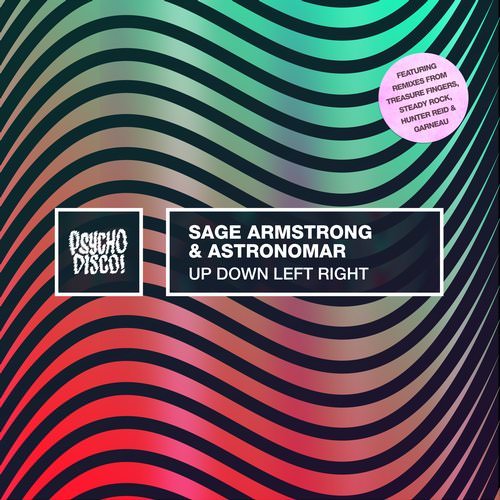 After their track ‘100 MPH‘ on Night Bass Records, it was only a matter of time before Sage Armstrong and Astronomar teamed up again. Both big fans of future acid sounds in their house music, it’s no surprise how ‘Up Down Left Right‘ turned out. While this weird, bass laden monster of a track stands tall on its own, the folks over at Psycho Disco! were determined to do one better. Well, technically, four better. That’s right, this release will come with four additional remixes for any type of party.

The original track is four solid minutes of intense bass, precisely placed and arpeggiated high hats, and groovy vibes. Featuring trippy, distorted vocals by Sage himself, ‘Up Down Left Right’ will have your body moving in many different way. The combined effort of Armstrong and Astronomar stretches and compresses the listener throughout the track. It leaves you feeling all the weird energy these two househeads embody.

The first remix comes courtesy of label boss Treasure Fingers. This remix is a testament to the acid disco vibe that incited the Psycho Disco! label into existence. Weird in all the right ways, you can feel the musical mastery in this production. Steady Rock comes in second, bringing a Bass House twist to the original. Heavy hitting on the high and low ends, this remix is great for those high energy, in your face house parties.

Hunter Reid and Garneau round out the release with two impressive reworks of an impressive track. An important rising artists to keep in your registry, Hunter Reid delivers nothing but perfection in this remix. Full of the bumping energy that is becoming an essential, unique element of his tracks, Reid accentuates the drive of the song with psychedelic phrases and well placed, one off stabs. Finishing out the track release strong with an old school treatment, Garneau is definitely here to drop some vibes. Throw in a little breaks and you’ve got yourself an incredibly unique track.

With so many high quality options to choose from it is impossible to have a favorite. You can listen to the entire release below and get your fill of ‘Up Down Left Right’. You’ll definitely want to get to a show to hear these tracks. Your home stereo or iPhone headphones won’t even begin to touch the bass in this release.