A musician mixed with robotics hobbyist presents us with a fascinating take on a genre in need of originality. Mortiz Simon Geist from Dresden, Germany has announced his first introductory album titled “Robotic Electronic Music“.

What separates this techno album from all other electronic music is that ALL sounds are created live. Imagine big band concerts from days of old, scaled down with miniature robots. The magic behind this story comes from Geist’s willingness to find a way to “get music out of electronics.”

Geist uses a small keyboard controller to send signals to the micro controllers which in turn make the machines perform. If you look closely at his performances, you can see familiar devices. These include but are not limited to glasses half full of water, hard drives, and mechanical relays along with a variety of other devices. Furthermore, all of the devices have been custom made via a mixture of 3D printing tech and hand tools. 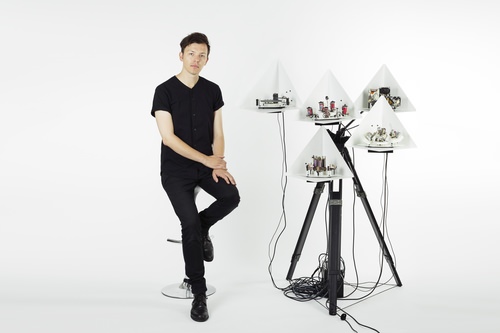 “For me it is a way to get music back out of electronics. Because if you have a laptop, and you are standing on stage, actually the audience they don’t really know what’s going on. I could also check my emails and nobody would notice.“

Mr. Geist is not the first person to produce electronic music through mechanical devices. Although this may be true, he IS the first to release a full album using such a creative take on the scene. Below you will be able to see what makes the cogs turn in the upcoming album (and EP named, ‘The Material Turn‘ scheduled October 12th).