Spotify, the worldwide music streaming entity, faces a huge lawsuit. A former sales executive, Hong Perez, has filed a lawsuit against Spotify. The suit also includes its US head of sales Brian Berner. The suit states both were in violation over gender-based discrimination, equal pay violation, and defamation.

In a public complaint filed with the Supreme Court Of The State of New York, Perez had been with the company for three years. “She received extremely positive reviews and performance feedback. Her region was one of the top performing regions for Spotify”. Perez was even hailed a hero by Spotify when she helped a co-worker who was suffering from a stroke.

The complaint alleges that during Hong’s time with Spotify, she “became increasingly concerned about Spotify’s culture with respect to its treatment of women”. This eventually culminated with Brian Berner allegedly terminating her on false grounds. The document goes on, giving examples of this gender-based discrimination. Below is an excerpt from the complaint. 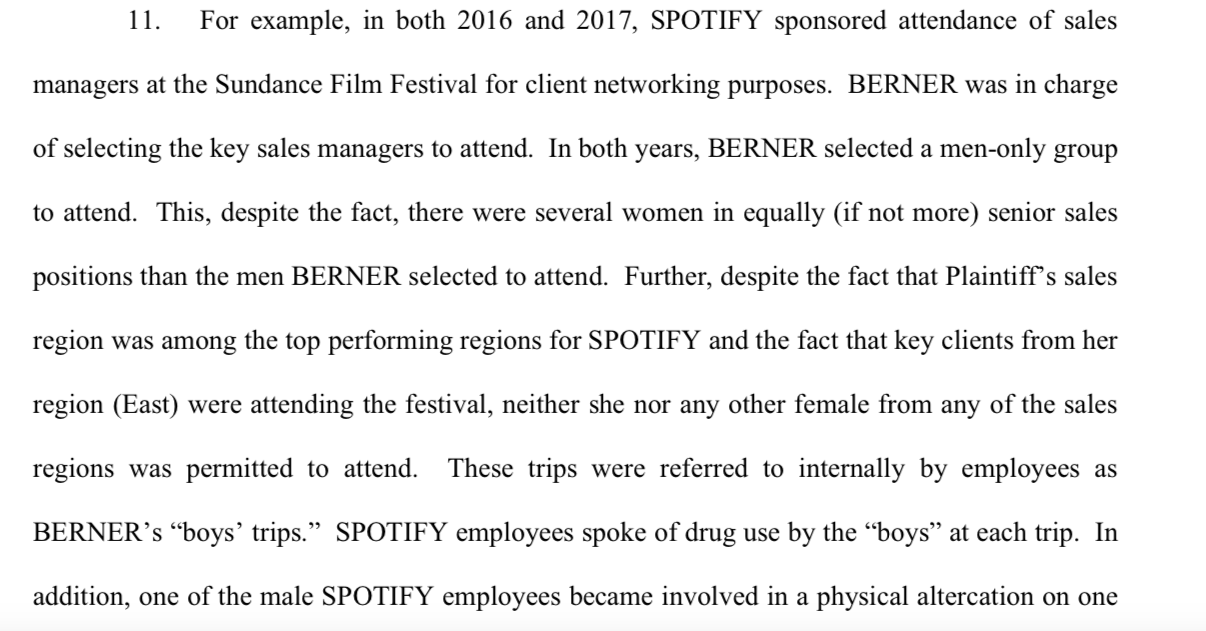 There are much more allegations throughout the document. One example describes a male employee getting promoted after a complaint cited him for sexual harassment. Another states that the Head of Human Resources thought it was “appropriate to tell an all-hands meeting that his favorite curse word is ‘c#nt’”.

In a statement given to Variety, Spotify said “We do not tolerate discrimination of any kind at any level. While we cannot comment on the specific details of a pending litigation, these claims are without merit.”

Looks like Spotify finds itself in a sticky situation. Stay tuned for more updates as this case goes on.