Argentinian trance duo, Heatbeat, have unfortunately split after over a decade together. The group formed in 2006, consists of Agustín Servente and Matias Cavez (aka Matias Faint). Matias came to announce Agustín’s departure Friday evening on Facebook, stating that he will be focusing on projects in a different direction in the future. Fans were reassured that the parting was amicable and that Matias will continue to perform as Heatbeat. This announcement comes after many have noticed solo projects from Matias since Summer this year. 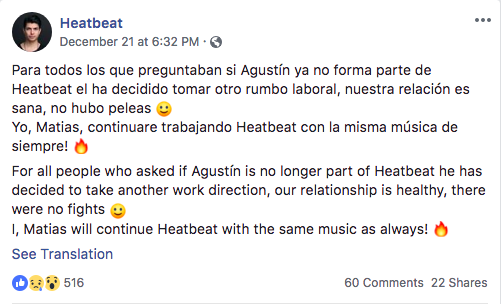 Unique for often implementing many Latin-style tunes into their tracks, Heatbeat has found success to many recognizable hits. Their top tracks include, “Paradise Garage”, “Nebula”, “Chow Mein”, “Rocker Monster”, and “Vegatron”. They are signed under Armada Music, founded by one of the godfathers of trance, Armin van Buuren.

No news have shed light on whether Agustín will remain behind the mixing board. We can, however, be sure to expect great things in whichever direction he ends up pursuing.

Although saddened, fans have shared their support and have thanked them for all the wonderful years. We are excited to see what Heatbeat will bring to the table next and wish both Matias and Agustín the very best in their future projects!