Rihanna confirms a new album will be released in 2019! The “Umbrella” singer recently replied to a questioning fan under an Instagram post regarding a new album release date. Rihanna replied, “2019”, with no additional details, sending vigilant followers into a frenzy. Attracting audiences of all genres, this teaser comes in conjunction with previous reports confirming collaborations with various top DJs! 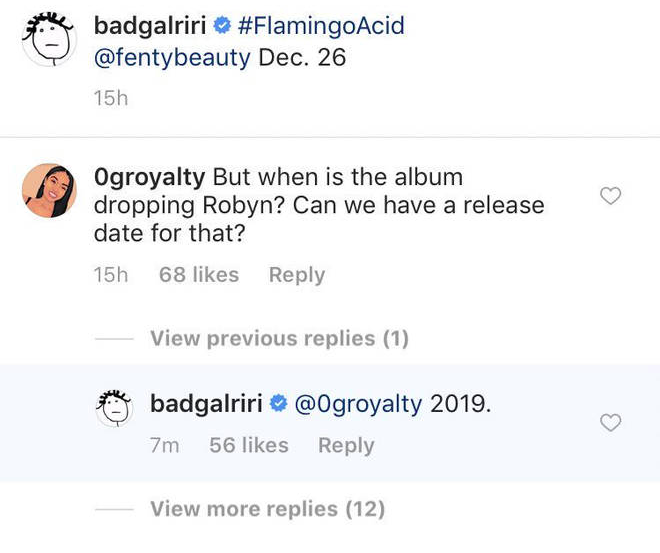 Rihanna previously revealed in a June 2018 Vogue interview that she has been back in the studio preparing for a new album. Additionally, Rolling Stones reports that Rihanna’s team has been busy reviewing an upwards of 500 records for this project.

Top DJs – Skrillex, Calvin Harris and Martin Garrix have been some of the few collaborations to be disclosed. Although, a Daily Star interview with Alesso back in September also cited Diplo and David Guetta to be a part of the project!

Rihanna is no stranger to topping dance charts. She has collaborated with Calvin Harris previously – the pair is famously known for delivering “We Found Love”, “Where Have You Been” and “This Is What You Came For”.

The upcoming album, R9, will be Rihanna’s ninth studio album. Fans can expect a dancehall, reggae-centric, album influenced by the singer’s Caribbean roots. Her most recent album, ANTI, was released 2016 and has since reached three times platinum. Despite releasing featuring singles the past two years, fans have been patiently awaiting for a new album.

With dancehall in mind, excited listeners can anticipate an album with remnants similar to her debut album, Music of the Sun. Additionally, with such big name DJ’s in the mix, we can surely look forward to some refreshingly unique tracks!