The rumors about Woodstock haven’t failed us and our dreams have been answered! Bethel Woods Center for the Arts announced the exciting news that they will be hosting the 50th Anniversary of Woodstock. Delighting many hopefuls wanting to relive the magic of Woodstock, the iconic 1969 Festival will be commemorated at the original historic site in Bethel, New York. Set for August 16-18, 2019, the honored event has been named the Bethel Woods Music and Cultural Festival. 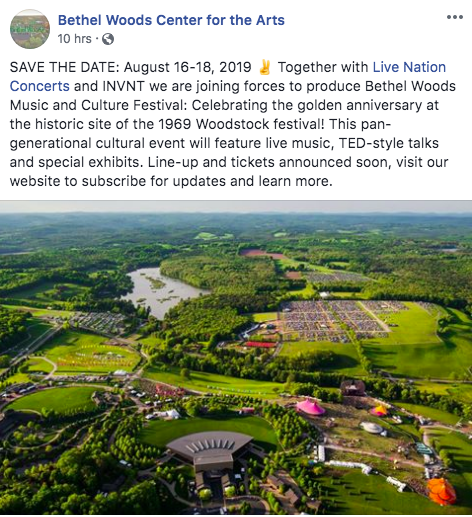 Exciting news, comes exciting times! This monumental event will launch a new experience for festival goers as there will definitely be something for everyone. Music artists will span across multiple decades and genres including, rock, hip-hop, pop, country, and EDM. Although no official line-up has been released, a leak last month flaunted many prospective headliners. Strong contenders and fan favorites comprise of Pearl Jam, Food Fighters and Eminem. Other names being thrown around include: Lorde, Pink, The Weeknd, Elton John, Ariana Grande, Coldplay—and not forgetting our EDM stars—Daft Pink, Swedish House Mafia, deadmau5, Skrillex and Steve Aoki!

So it turns out that this is not THE Official Woodstock 50th Anniversary. Michael Lang, Producer and co-creator of the original Woodstock Festival put out the following statement. In the coming weeks Lang will be announcing plans for the “real” Woodstock 50th.

“While the original site in Bethel remains close to our hearts, it no longer has the capacity to hold a real Woodstock Festival. I’m delighted that Bethel Woods is doing events in the coming year to celebrate what we brought to life in 1969 and I encourage people to visit the Museum and concert venue.”