HomeEvents Ringing In The New Year With OMFG!
Events

[Event Review] Ringing In The New Year With OMFG!

Ringing In The New Year With OMFG!

New Years Eve is known for being the last day of the year. It is also known for being a night full of festivities, and amazing shows. For a perfect example of this, look no further than LED‘s OMFG. Over the course of three days, San Diego was graced with performances from headlining artists such as Kaskade, Illenium, San Holo, and Porter Robinson.

OMFG took place at the newly crowned “Pechanga Arena San Diego”. The Pechanga Arena is located in the seaside community of Point Loma, in San Diego. The arena venue holds a capacity of 16,100. Being an indoor arena, the venue hosted one giant dancefloor, with a near 360° seating area.

I have attended multiple LED events held here, and in all honesty this was quite possibly the best one yet. In years past, the experience here has been plagued by both uncomfortable temperatures, and poor acoustics. LED seemed to keep both of these issues in check as the venue was a cool, attendee-friendly space, with better than average sound quality.

If I were to have one gripe, it would probably be having the dancefloor closed off by security guards halfway through each night. This left numerous fans stuck in the stands, being forced to watch the show from afar. I guess this is what happens when you have a sold out event, I blame the lineup.

In years past, the New Years Eve event was held over two days. This years event saw LED extend the event into a three day spectacle as the the initial two days sold out almost instantly. In the end, all three days sold out, leaving hopefuls scrambling to find tickets in the lead up to the event. 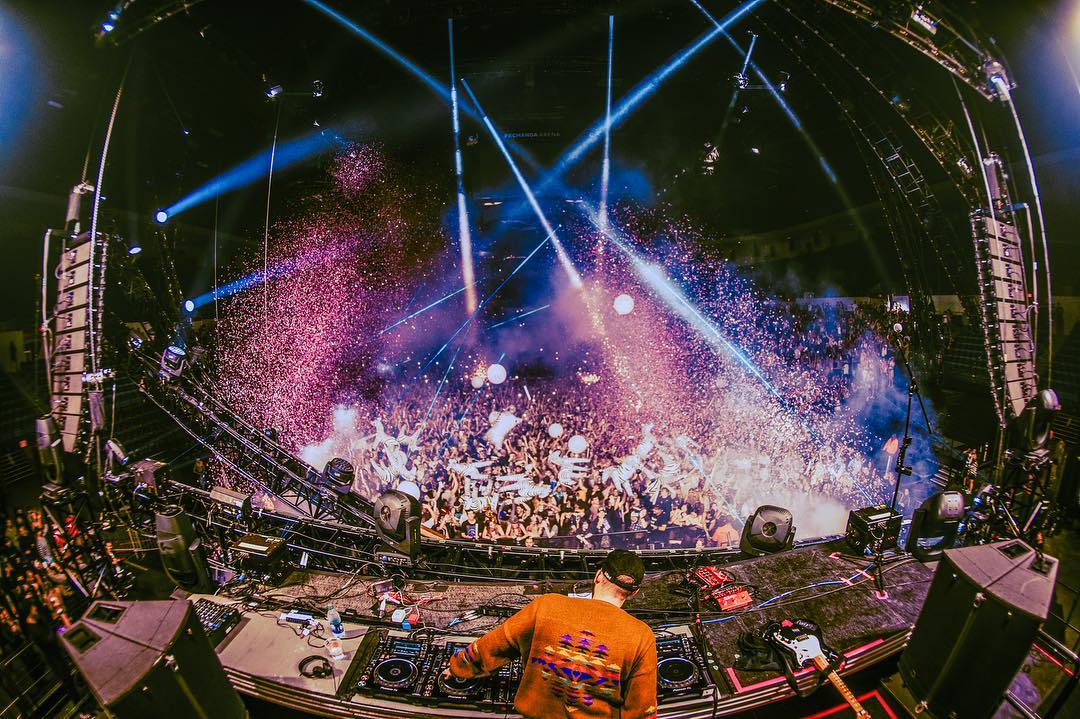 The first day set the bar high, as newcomers Lokii, Fangs, & Mitis all brought the heat. The night continued on with Slumberjack taking control, leading us into a Manilla Killa set. The best part of the night was easily the special two-hour Kaskade set. He later turned over the decks to the veteran DJ duo in Tritonal, who put their seal on an already amazing night.

Dabin, Bonnie x Clyde, & Luca Lush all came ready to play, as they set the stage for those playing after them, as well as the attendees who got there at the start of the night. Said The Sky made sure to bring the feels, which was easily the best primer for Illenium. Going forward, Boombox Cartel brought the house down, leaving just enough energy for the crowd to lose it to SAYMYNAME.

What was probably my favorite night of OMFG was this one, as there were multiple artist I had yet to experience on the schedule. Yetep, Gammer, and Valentino Khan all brought the fire that they are known for, but it wasn’t until San Holo took the stage that things slowed down a bit. 1788-L followed, tearing up the dancefloor with his signature style of bass music, leading the way for an epic Ekali set. Porter Robinson closed off OMFG, and I was honestly surprised that everyone in attendance still had energy to keep going. It was easy to see that a majority of the crowd was there for him, oh Porter.

Kaskade is easily one of the best in the game, and the fact that the crowd got to experience a special two-hour set is amazing. A true DJ in every sense of the word, Kaskade brought his A-game, and kept the vibe going well into the night.

Ekali has been all over the news when it comes to the world of Dance Music. I finally got the chance to check him out, and now I can understand why. The man knows how to throwdown a proper set, and keep the vibe alive. His edit of Martin Garrix‘s ‘Scared To Be Lonely‘ had time feeling still there for a minute.

Ringing in the new year with San Holo has to be my favorite moment of the whole weekend. As of late, he’s really switched things up quite a bit. He played all of the tracks that we’ve come to know and love from him. What I enjoyed was that his set contained most of, if not all, of the tracks from ‘album1‘. It was very awe-inspiring to see him whip out his guitar and play his melodies live as well.

LED‘s OMFG is expected to return at the tail end of 2019, so be sure to be on the lookout. For more events, be sure to check out My Life Everyday, have a happy 2019!