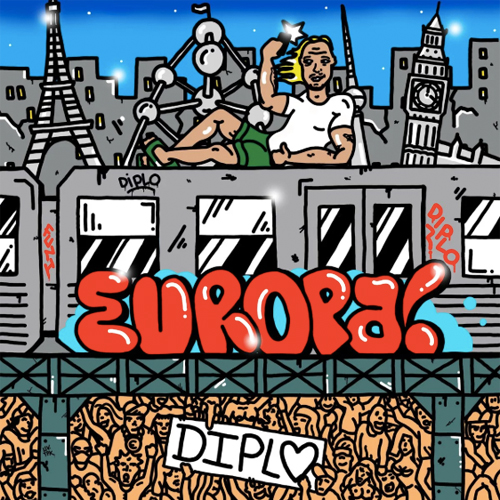 From Silk City, Jack Ü, Major Lazer, LSD, to just—Diplo, there’s no denying his range in production talent. There’s almost no territory that Diplo can venture into and do wrong in, and he had proven just that when he released his hip-hop/trap EP, California, nearly a year ago. Similarly in suit, Diplo has taken to Europe this time around to collaborate with a number of underground hip-hop artists to bring his new and wildly fresh international EP, Europa.

Europa is named to represent the continental talent. Comprised of six tracks, each one brings a uniquely different flavor into the mix. As an opener, Diplo joins forces with up-and-coming London raised rapper, Octavian, to deliver the low-key track ‘New Shapes’. The energy proceeds to pick up to the pop-trap of ‘Boom Bye Bye‘ with vocals by French hip-hop artist, Niska. Clearly indiscriminate of old or new talent, Diplo enlists Dutch artists Bizzey and Ramiks on-board for soca style ‘Dip Raar’. If the former sounded familiar—yes, it’s Bizzey, previously a member of the now duo, Yellow Claw.

Despite the name Europa, this EP embodies music influences from all over the world, truly transcending genres. In this ever-growing industry, it’s easy for big artists to come together to deliver a safe sell-out hit—but to tour, explore and support local underground artists along the way is commendable in its own right. Honing in the art, it’s unnecessary to say the outcome turned out beyond exemplary. No doubt will we be hearing more from these artists as Diplo has proven his knack for spotting talent.

Europa is out now! Check it out down below.